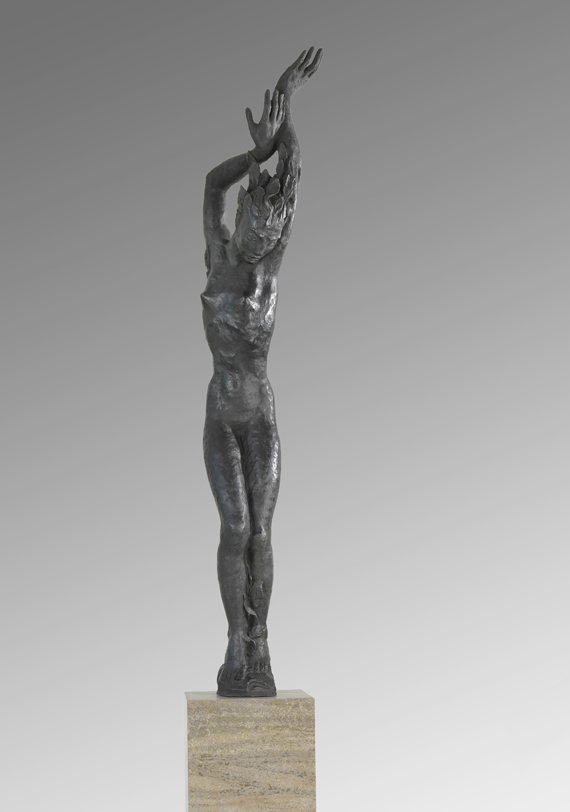 Ingrandire
+
201
Renée Sintenis
Große Daphne, 1930.
Bronze with brown patina
Stima:
€ 80,000 / $ 93,600
Risultato:
€ 462,500 / $ 541.125
(25% commissione inclusa)
Descrizione oggetto
Große Daphne. 1930.
Bronze with brown patina.
Berger/Ladwig 117. Buhlmann 68. With the foundry mark "H.NOACK BERLIN-FRIEDENAU" on rear. From an edition of at least 10 casts. Height: 145 cm (57 in).
Lifetime cast. Cast by the art foundry Hermann Noack, Berlin-Friedenau (with foundry mark).
• With "Daphne" Sintenis created her finest expression of female grace and an allegory of modern femininity.
• Next to the Berlin Bear this is the artist's largest bronze.
• Very rare. To date only 4 casts of "Große Daphne" have been offered on the international auction market (source: www.artprice.com).
• First copy on the international auction market with the early "Friedenau" foundry mark.
• Another cast is part of the collection of the Museum of Modern Art, New York.
• At least five of the ten copies mentioned in Buhlmann are in museum ownership today.

Essay
Sintenis - a female exception in the Berlin art world

Renée Sintenis, who became an artist against her parents' will, showed her works at the Berlin Secession as early as in1915, and was a real exception in the Berlin art world of the 1920s and 1930s. In 1931, one year after Sintenis created the "Große Daphne", she was the only female artists of her time to be appointed to the Prussian Academy of the Arts, where she taught until she was forced to leave by the Nazis in 1934. With the sculpture "Daphne" Renée Sintenis probably formed the most beautiful expression of feminine grace.

Renée Sintenis and the motif of "Daphne"

She turned to the subject of classical mythology as early as in1917/18 when she created her first, small statuette of "Daphne". The spontaneous metamorphosis of the nymph Daphne into a laurel tree as she flees the love-stricken god Apollo is a poem from Ovid's Metamorphoses. In addition to Sintenis ’creation, the famous marble statue of Gian Lorenzo Bernini (1622-1625, Rome, Villa Borghese) is certainly one of the best-known sculptural representations of this motif. While Bernini's statue shows Apollo and Daphne, Sintenis solely focused on Daphne and the moment of her beginning transformation. The unstoppable imminent transformation is only hinted at with the leaves growing out of her ankles, hair and armpits. Sintenis' concentration is more on the fragile physicality, which anticipates the metamorphosis in the extreme elongation of the limbs.

The “Große Daphne“ as a symbol of the modern woman 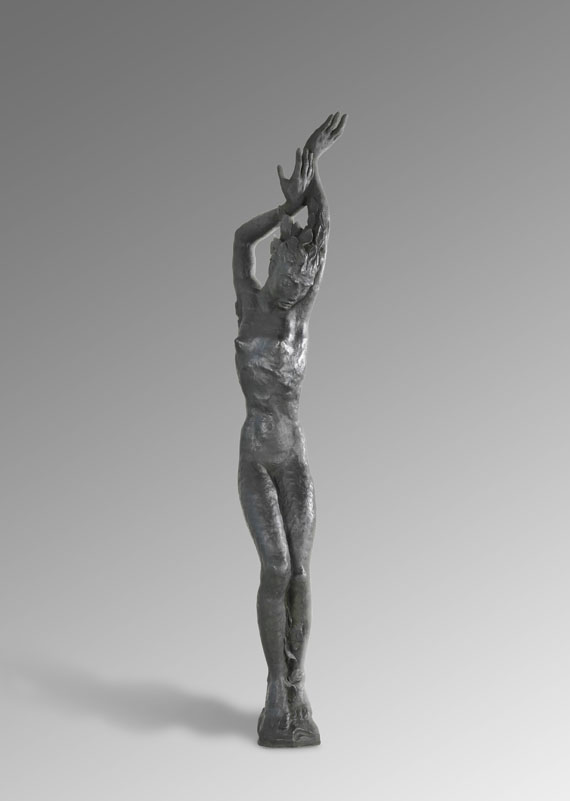 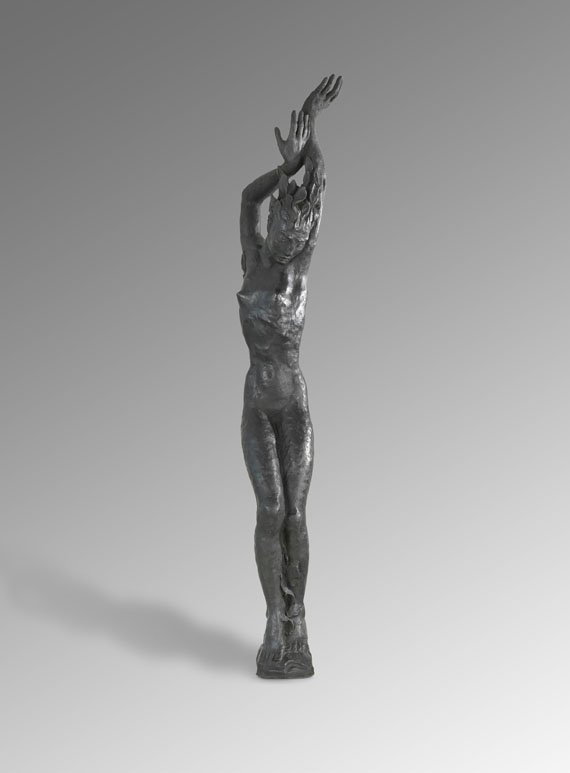 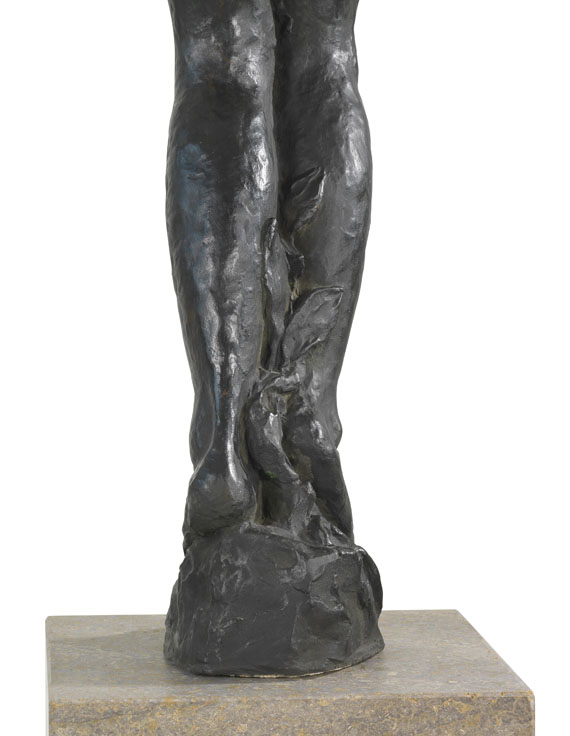 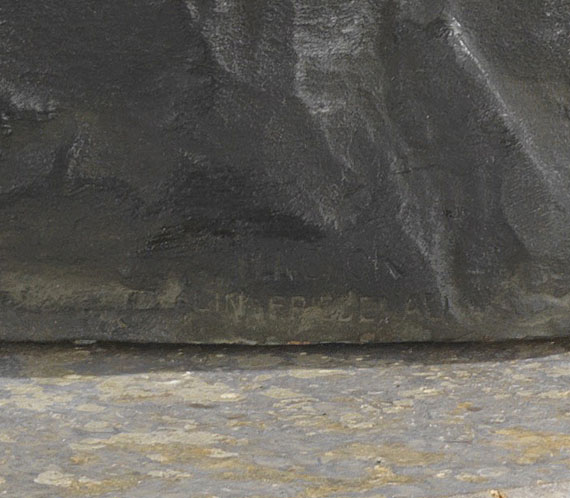 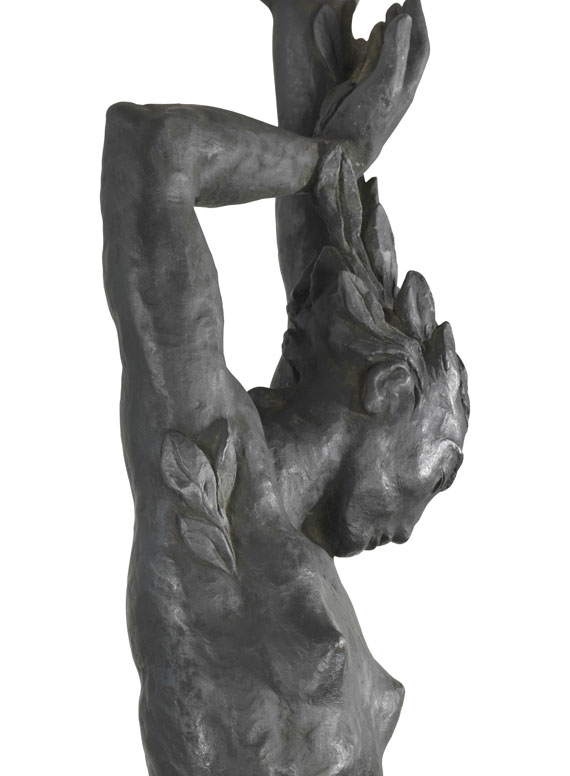 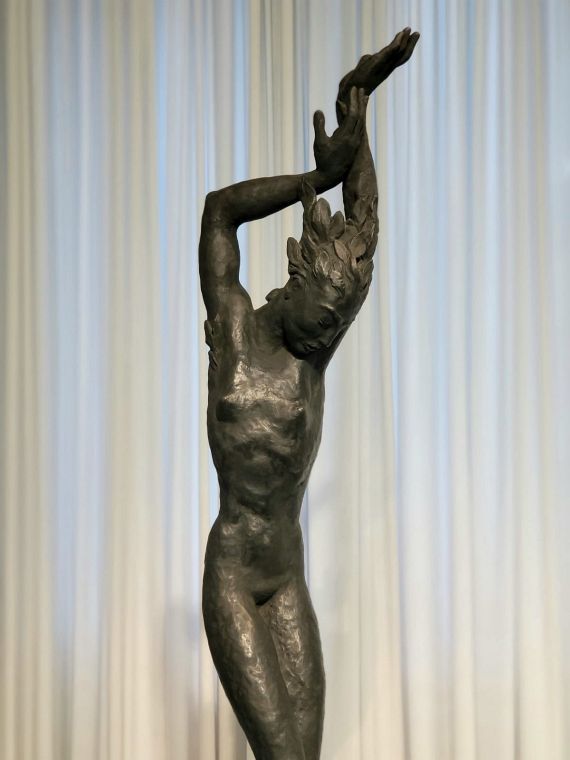