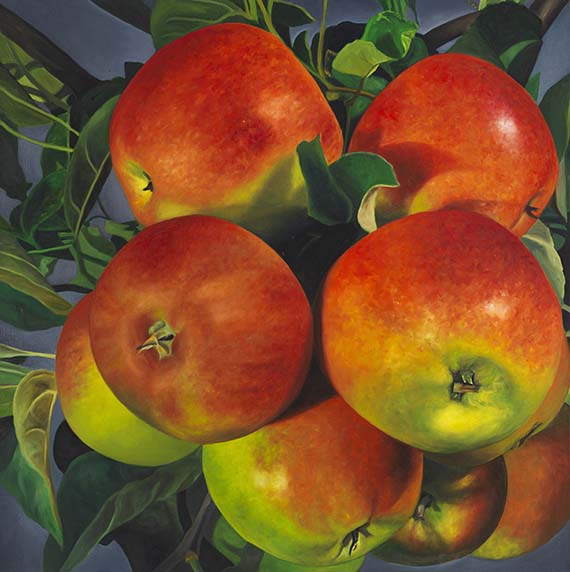 • Karin Kneffel's photo-realistic fruit depictions are among her most sought-after works on the international auction market.
• This is one of her earliest fruit still lifes with which Karin Kneffel celebrated her breakthrough in the 1990s.
• For the first time offered on the international auction market
• Recently the Kunsthalle Bremen and the Frieder Burda Museum honored the artist with grand exhibitions.
•Since 2012 Kneffel has been represented by the internationally renowned Gagosian Gallery.
• Since 2008 she has been teaching at the Academy of Fine in Munich.

PROVENANCE:
Galerie Bob van Orsouw, Zürich (with the label on the stretcher).
Private collection Switzerland (acquired from the above in 1996).

"Besides, fruits seemed suitable to me for accentuating the special features of a painted representation as opposed to reality. How does a painting show itself to be a painting? Questions about reality and realism occupied me. What about beauty?"
Karin Kneffel, quoted from: Kunsthalle Bremen, Stiftung Frieder Burda (ed.), Still, Munich 2019, p. 85.

Karin Kneffel is one of the most important contemporary German painters. When she began her education with, among others, Gerhard Richter, the Art Academy Düsseldorf was clearly dominated by men. In the 1990s she had her breakthrough in the art world with an early work characterized by realistic depictions of oversized fruits and animal portraits. Karin Kneffel's complex work was recently honored in a large exhibition at the Kunsthalle Bremen and in the Museum Frieder Burda, Baden-Baden. In 2012 she made her debut in an exhibition at the internationally renowned Gagosian Gallery in New York, which made her part of the contemporary art elite.

Her signature style is characterized by a perfect illusion of reality, for her pictorial spaces the artist chooses extreme details, a varied play of close-up and long-distance views and vexing reflections determine her works. The fruit still life has a long tradition in art history, mostly opulently draped on tables, the fruits stand for prosperity and abundance. At the academy, she was advised to stay away from this genre, including depictions of animals. Especially as a painter, these motifs are too lovely, too decorative. Kneffel ignored this advice and saw this attitude as a challenge. She takes the fruit still life to a new level and gives it a right to exist in contemporary art - a field in which everything seems to have been told already.