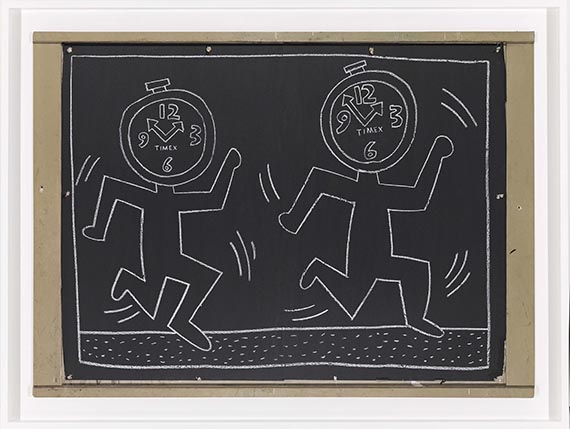 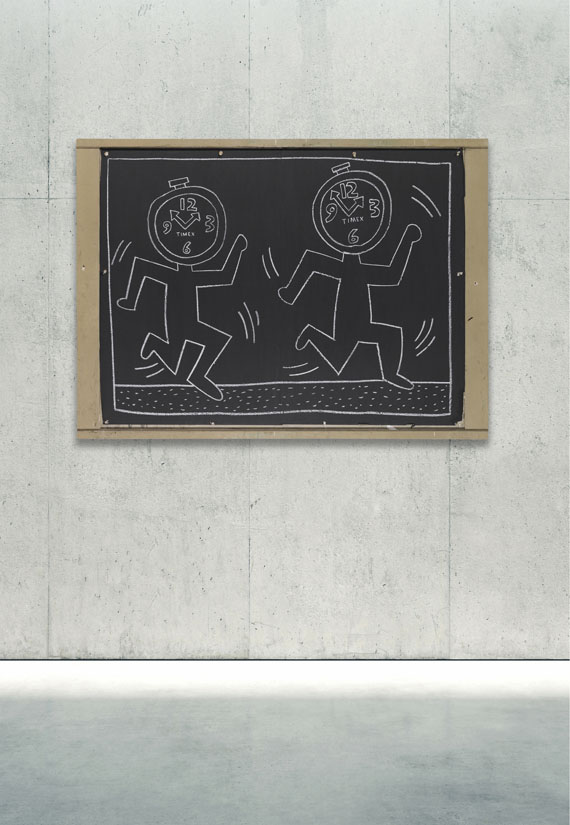 
"I have been drawing in the subway for three years now, and although my career above ground has skyrocketed, the subway is still my favorite place to draw."
Keith Haring, in: Art in Transit. Subway Drawings by Keith Haring, New York 1984.

"The only reason it’s in the street is because that was the way it would get to the people."
Keith Haring in an interview with Barry Blinderman, July 1981, published as “Keith Haring’s Subterranean Signatures,” Arts Magazine, September 1981.

"Art is nothing if you don’t reach every segment of the people."
Keith Haring, quoted from: L. A. Times (online archive), February 17, 1990, Keith Haring: Subway Pop Graffiti Artist.

"I think it is more important to make a lot of different things and keep coming up with new images and things that were never made before than to do one thing and do it well. They come out fast but, I mean .. it's a fast world."
Keith Haring about his Subway Drawings in an interview with Charles Osgood, 1982.

"The most important thing I ever did"
More than forty years have passed since a 22-year-old Keith Haring created his first chalk drawings on the matte black paper that covered expired advertisement panels in NYC subway stations. Done right in front of mystified commuters, often at peak hours, these drawings comprised a heroic, uncommissioned public art project of a scale and duration that New Yorkers had never seen before and are unlikely to see again. Of the estimated five to six thousand subway drawings Haring did from January 1981 through 1985 - with sporadic forays later in the 80s - very few are known to have survived intact. Haring never intended the subway drawings to be exhibited above ground, but he did refer to this vast body of work as “[..] in its pure philosophical statement, definitely the most important thing I ever did.” (Interview with Jason Rubell, conducted in January 1990 and published as “Keith Haring: The Last Interview”, Arts Magazine, Sept. 1990).

Precise, concrete and comprehensible messages
For Haring, the medium of chalk was “clean, economical, fast.” (Interview with Barry Blinderman, July 1981, first published as “Keith Haring’s Subterranean Signatures”, Arts Magazine, Sept. 1981), affording him quick entry and exit from the dozens of favorite stopping-points along his miles-long subterranean studio. The speed at which he worked to avoid getting caught by MTA authorities honed his ability to strip drawing down to its essentials, conveying his multivalent messages with telegraphic clarity. The subway drawings provided Haring with a literal blackboard for developing new symbols and transforming earlier ones into myriad variations on universal themes. With his fluid line, he imbued his repertoire of figures, pyramids, animals, flying saucers, and mythical hybrid beings with frenetic energy and mystery.

Dating the drawing
Haring’s clock-headed figures first appeared in 1982, a year after he made his first subway drawings. They remained prominent through 1983. Two Tseng Kwong Chi photographs in the 1984 Art in Transit book lend support to this date range but by no means pinpoint when other similar drawings might have been made. In one photo, a drawing of a clock-head spinning a globe is flanked by posters advertising the Broadway musicals Dreamgirls and Cats. Cats opened on Broadway on October 7, 1982, thereby establishing that the drawing was done in 1982 or after. In the second photograph, a two-tiered drawing of a flying clock-head atop a running clock-head appears to the left of advertisements for the musicals A Chorus Line and Evita (fig.). Evita closed on Broadway on June 26, 1983, so that drawing was done no later than 1983. Finally, the Lucio Amelio book published in 1983 reproduces two ink drawings of clock-heads that Haring made in Naples for his exhibition in 1983 (fig.). Untitled could therefore be dated as either 1982 or 1983.

A contemporary memento mori
Although there are depictions of timepieces in art from the 17th century onward - most notably in Dutch genre painting and in Dali’s "The Persistence of Memory" Haring may have been the first artist to create a chimerical figure with the head of a clock. His hybrid figure predates Laurie Simmons’ "Walking Pocket Watch", ca. 1990, a photomontage of an oversized timepiece resting atop the lower half of a woman’s figure, by around seven years (fig.). It seems inevitable in retrospect that Haring’s ever-shifting and recombined symbols would yield a running figure with a timepiece as a head, particularly considering the context - thousands of people running late, rushing to catch trains or to exit the station. For Haring there was never a sense of stasis, either in his life or art. Tall and wiry, he had a sprinter’s focus and physique. He created countless works of art in a tragically brief career, with an urgency fueled not only by his restless imagination, but also by his premonition of an early death. In a journal entry from March 20, 1987, he remarked: “I always knew, since I was young, that I would die young .. I live every day as if it were the last .” (Keith Haring, Journals, New York 1996, p.75-76).
The Timex Corporation’s famous slogan, “It takes a licking and keeps on ticking”, is especially applicable to "Untitled (Twin Clock-headed Figures)", in which both timepieces bear the Timex logo (Just as Haring appropriated a wristwatch brand name in several of his Clock Head drawings, in spring 1985, he returned the favor, permitting his own copyrighted image of a winged two-legged clock to adorn the face of the Blanc Sur Noir wristwatch by Swatch, fig.). Haring’s work has indeed “[kept] on ticking” throughout the three decades since his death, sustaining his intention to bequeath to us a timeless art with mass appeal. On the other hand, as the artist’s quote above suggests, the clock-headed figures function also as contemporary memento moris, reminders of the brevity of our existence; the drawing’s universality notwithstanding, one cannot help but envision "Untitled’s" frenetic figures as self-portraits of an artist who knew, several years before he was diagnosed as HIV-positive, that he was racing against time.
Barry Blinderman

Barry Blinderman is curator, writer and educator. He received his BA in art history from Boston University and his MA in art history from University of Pennsylvania. From 1980 to 1987, he directed Semaphore Gallery and Semaphore EAST in New York City, championing the work of Martin Wong, Nancy Dwyer, Robert Colescott, Ellen Berkenblit, Keith Haring, Lady Pink, Tseng Kwong Chi, and other highly distinctive artists emerging at that time. 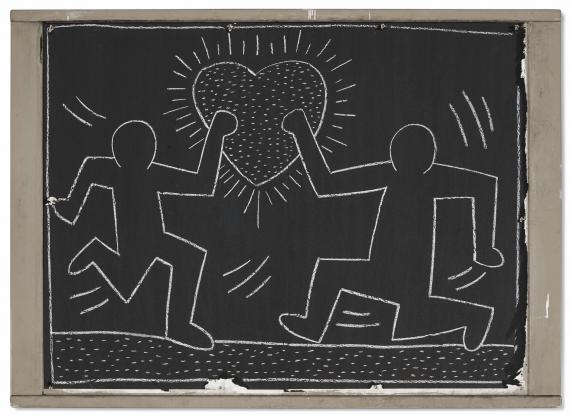