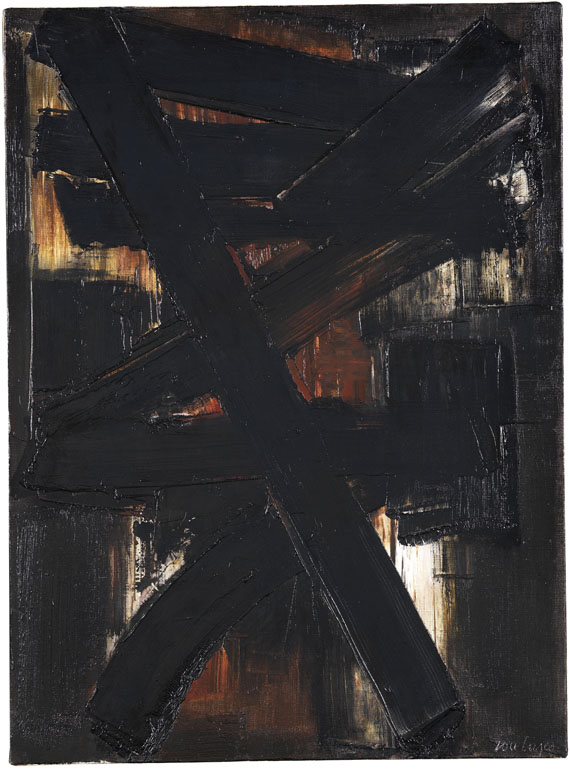 Pierre Soulages was born in Rodez, Aveyron in the South of France in 1919. In 1941 he attended the Ãcole des Beaux-Arts. There he also became acquainted with the abstract artist Sonia Delaunay. As of 1946 he maintained a studio in Courbevoie near Paris and established contact with artists such as Domela, Picabia, Hartung and LÃ©ger. Already living in Paris he designed several stage sets between 1949 and 1952. Along with trips to Mexico and the USA, his visit to Japan in 1958 took on special significance. Early impressions of his country's austere Romanesque architecture and Celtic monuments as well as the later influence of East Asian calligraphy dominated his gestural, yet compositional well-balanced paintings with their black and brown beam fonts on light colored bases.

This feature becomes obvious in our work as well: In a background kept in light and dark shades of brown, Pierre Soulages put the broad black beams, characteristic of his art in the late 1950s. It is not only their actual dimension that dominates the canvas, on top, their expressive powers do the same job. Flowing across the entire surface, they differ from earlier works, in which shorter, often symmetrically placed beams structure his works. Our work does not captivate through its free gesture and the colorsâ texture, which was quite important to Soulages, as it possesses a relief-like structure and not merely its a color value. It is a structure that captures the light and allows unique visual experience. This was also the fundament for works made as of the 1960s, which the artist described as "monopigmentaire": At first sight one notices the monochrome color fields, however, they soon disclose their identity as "imaginary bodies" defined by a reliefed surface (cf. Hans Platschek, Das Licht ist schwarz, in: KÃŒnstler. Kritisches Lexikon der Gegenwartskunst, Munich 1998, p. 10).

As an important representative of the Ecole de Paris and informel art, Soulages was repeatedly represented at the documenta in the 50s and 60s; his first great retrospective took place in Hanover, Essen and The Hague as early as 1960/61. In the following years he received numerous international art awards, including the 'Rembrandt Award' in Germany in 1976 and the 'Great National Award for Painting' in Paris in 1987. In 1994 he was honored in Japan with the 'Praemium Imperiale' for painting. The execution of the 104 stained-glass windows for Conques abbey, the designs for which he had already begun in 1987, was completed in 1994. Pierre Soulages lives and works in SÃšte and Paris. [KP].