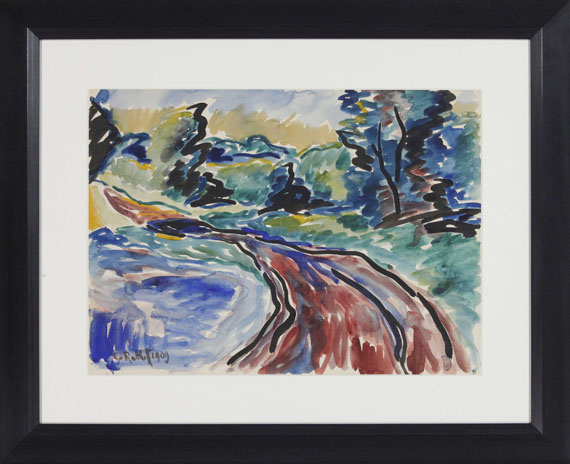 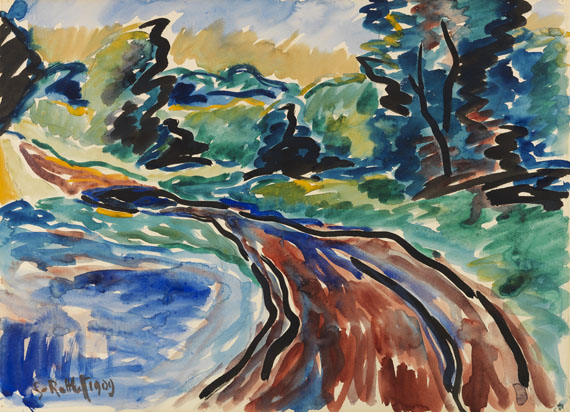 • Wonderful example for the significance of the watercolor for Schmidt-Rottluff in the year 1909.
• Watercolors from this year are rarely offered on the art market.
• Excellent depiction of the Dangast coast.

The watercolor is registered at the Archive of the Karl and Emy Schmidt-Rottluff Foundation.

Karl Schmidt-Rottluff became intensively occupied with watercolor painting during a summer stay in Dangast on the North Sea in summer 1909. He rendered the landscape around the small tranquil coastal village in many works, putting focus on capturing the atmosphere with the newly attained expressiveness. Remarkable creations came into existence, among them our sheet "Kühler Morgen" (Cool Morning). Entirely autonomous and free from any notions of randomness, they are at eye level with his paintings, an intention that he also underlined with the large formats he chose for these works. Early watercolors are characterized by a swift and strongly gestural flow, while the grounding remains visible between the color fields. Even though these works are created from the colors, strong traces of a graphic flow can still be observed, the direction of the brushstroke determines the composition. The contrasting complementary colors red-green and blue-yellow increase the impression of freshness and a spontaneous execution, at the same time their visual aggressiveness is significant for a radical break with the tradition. 1909 was the year that Karl Schmidt-Rottluff began to define pictorial elements with black contour lines. The liberation of watercolor art from its shadowy existence and a rebirth in its true element pure color was the merit of the artists of Expressionism. Significant watercolors from these years are in museum ownership nowadays, such as the work "Fabrik" (1909) at theBerlin Brücke-Museum. Magdalena Moeller states: "Watercolors from1909 must be regarded as a homogeneous group of works. They count among Schmidt-Rottluff’s most fascinating accomplishments." (M. Moeller, in: Ex. cat. Werke aus der Slg. des Brücke-Museums Berlin, Hypo Kulturstiftung, Munich 1997, p. 19).By restoring the force of expression of the watercolor, Karl Schmidt-Rottluff achieved nothing less than a renaissance of an art form in danger of drowning in decorative colorist painting. From that point onward it was on an equal footing with the paintings and drawings of its era. [EH]
Ulteriori informazioni
+
Vendere
Desidera vendere un simile oggetto?
+
Registrare di
Karl Schmidt-Rottluff
+
Domande sull´acquisto
+
Contattare esperti
101
Karl Schmidt-Rottluff
Kühler Morgen, 1909.
Watercolor
Stima:
€ 80,000 / $ 80,000
Risultato:
€ 200,000 / $ 200,000
(25% commissione inclusa)
Ulteriori informazioni
+
Vendere
Desidera vendere un simile oggetto?
+
Registrare di
Karl Schmidt-Rottluff
+
Domande sull´acquisto
+
Contattare esperti
Offerte di Karl Schmidt-Rottluff
+
tute le offerte
Altre cose che potrebbero interessarti
+
tute le offerte
Karl Schmidt-Rottluff - Ogetti venduti
+
tute le offerte