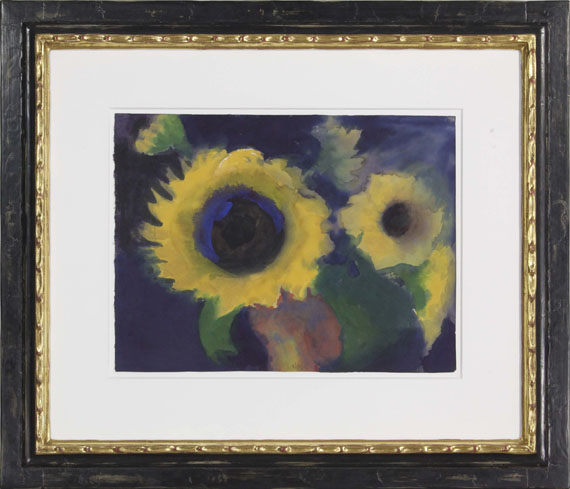 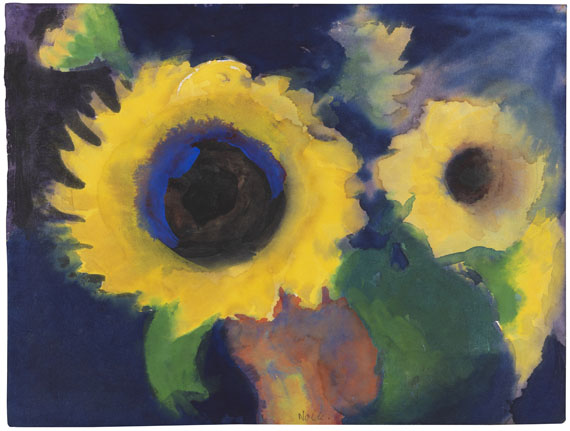 LITERATURE: Galerie Kornfeld, Bern, June 20, 1997, lot 98.
The way he groups blossoms and flowers, how he uses light and dark, how he manages to combine tenderness and strength, how he captures naturalness and yet creates a picture from the whole, a true picture, is nothing but virtuoso. Who saw his poppy and sunflower pictures will have a hard time indulging in those of other artists. Light, color and beauty is what he fully captured.
Ada in a letter to Hans Fehr, 1927

Emil Nolde lived a withdrawn artist life far up north on the Danish borde, where he met only few fellow artists. Nolde admired Edward Munch and visited, for example, James Ensor in Ostend. For a short time he was a member of the artist group "Brücke" and tried to establish his own artist group, an endeavor not crowned with success. As a young artist he traveled a lot with his wife Ada. Although the couple maintained a lot of contacts and still had an apartment in Berlin - the construction of a house based on plans by Mies van der Rohe failed - their close-to-nature life on Alsen, Utenwarf and Seebüll is characterized by an idyllic solitude. Probably also in an attempt to a self-staging, Nolde described himself in his notes as an artist "without role models" who goes his own way. That he did find, even if not quite as off the beaten track as he himself claimed. Apart from earlier attempts, Nolde intensified his exploration of the watercolor technique in his forties. In the second half of his life, this will dominate Nolde's artistic work and must be seen on an equal footing with his oil paintings. Over a short time Nolde had achieved a mastery second to none. In addition to classic watercolors, he worked with tempera, Indian ink and colored chalks and constantly explored the limits of the technique. The watercolor demands both speed and control, its typical immense luminosity is the most fascinating aspect about it. The first dripping wet step requires swift action, the second step requires patience and vigilance, as the right time to finish the work in order to preserve the color and structural contrasts has to be identified. Jolanthe Nolde, his second wife, describes this moment as follows: "Every line, every surface poses a risk. The picture grows, even if he is not permanently working on it. I was often worried about a particularly beautiful line, wondering how much it is going to change still. " (quoted from. Astid Becker / Christian Ring (ed.) Emil Nolde. Glühender Farbenrausch, 2019, p. 11) Just like the watercolor technique, the sunflowers also occupy a special position in Nolde's work. In 1926 he created the first oil painting with the subject that has since reappeared with increasing emphasis. Nolde's flower pictures are an expression of mood and emotion. In his eyes, flowers have a soul, in particular the sunflowers with their man-high stems and large heads are creatures with human-like sensations . They symbolize the endless cycle of life and death. “I loved the flowers in their destiny: sprouting up, blooming, glowing brightly, exhilarating, bowing, withering, ending in the pit. Our human fate is not always as logical and beautiful [..] "(Emil Nolde quoted from: Martin Urban, Emil Nolde - Blumen und Tiere, 1965, p. 7/8). He stages the flower heads in close-up view, they are the sole actor, their surroundings play no role in the composition. Only the dark blue plays an important role as a reinforcing complementary color to the bright yellow of the sunflower heads, which stretch up to the sky like fire wheels. [SM]
Ulteriori informazioni
+
Vendere
Desidera vendere un simile oggetto?
+
Registrare di
Emil Nolde
+
Domande sull´acquisto
+
Contattare esperti
425
Emil Nolde
Zwei Sonnenblumen vor dunklem Grund, 1930/1935.
Watercolor
Stima:
€ 90,000 / $ 90,000
Risultato:
€ 225,000 / $ 225.000
( commissione inclusa)
Ulteriori informazioni
+
Vendere
Desidera vendere un simile oggetto?
+
Registrare di
Emil Nolde
+
Domande sull´acquisto
+
Contattare esperti
Altre cose che potrebbero interessarti
+
tute le offerte
Emil Nolde - Ogetti venduti
+
tute le offerte