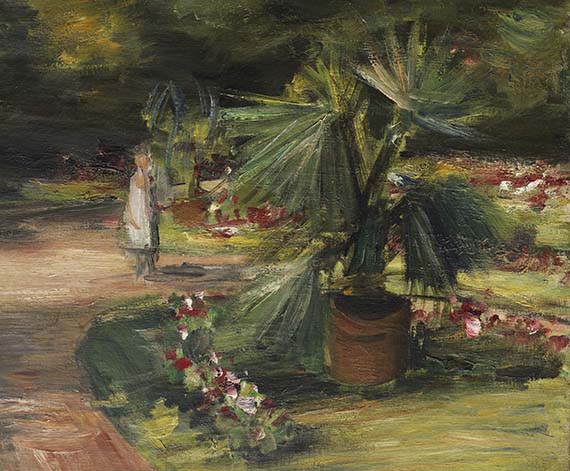 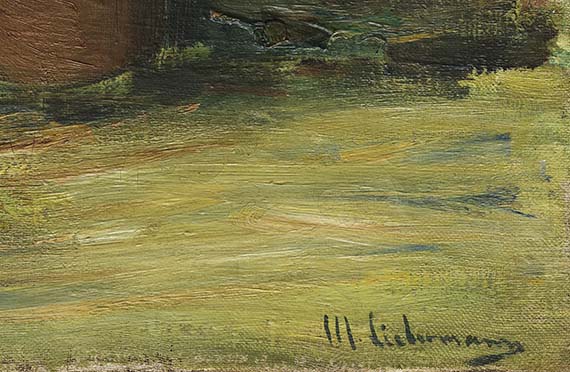 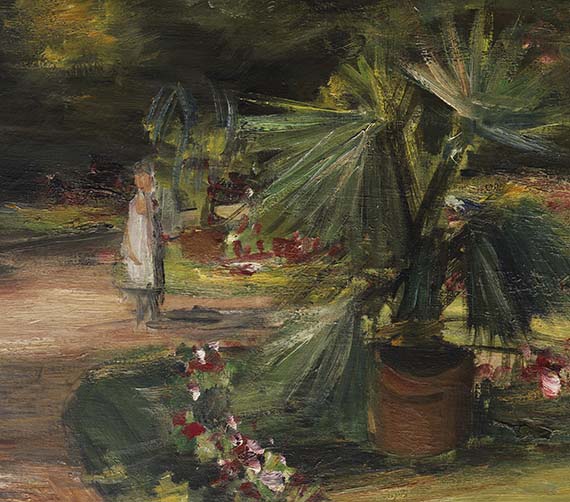 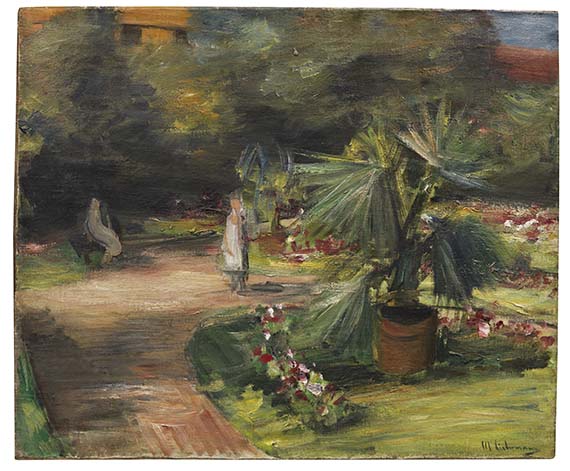 Accompanied by a written expertise from Prof. Dr. Matthias Eberle, Max Liebermann-Archive, Berlin, from March 21, 2016. The work will be included into the addenda of the catalog raisonné of paintings with the number 1908/36a.

"Liebermann only discovered the garden as a motif at the age of sixty during a summer stay in the Dutch resort Noordwijk in 1908. [.] Around eight years later, during the war, his garden on Wannsee would become a key motif in Liebermann's creation. "
Prof. Dr. Matthias Eberle, 2016.

Max Liebermann only discovered the garden as a motif for his artistic work in later years. The charm of the garden as nature cultivated by man had previously preoccupied the impressionists Claude Monet, Edouard Manet and Camille Pissarro. The first points of contact in Max Liebermann's work can be traced back to the 1880s and 1890s while the artist traveled the Netherlands and Italy. In "Stevenstift in Leyden" (Eberle 1889/6 and 1890/2), for example, a lush, splendidly blooming rose garden is shown in the right part of the picture, and a few years later, presumably during a stay in Zandvoort, individual rural garden views emerge, among them the "Garten mit blühenden Sonnenblumen“ (Garden with Blooming Sunflowers, Eberle 1895/13 and 1895/14). Liebermann finally became acquainted with the beauty of the Northern German farm gardens through the then director of the Hamburger Kunsthalle, Alfred Lichtwark (1852–1914) in the 1890s. A discovery that might have been part of the reason why he purchased property on the Großer Wannsee in Berlin a few years later. After a joint visit to a garden in the Hamburg marshlands, Lichtwark recollected that Liebermann "let his gaze wander over the long flower beds", "over the regular, transverse vegetable beds behind them". He reported: "Soon he stood in front of the front door and observed the effect of the garden, then in front of the arbor, enjoying the sight of the house, which [.] lay in the gentle shade cast by the row of cropped linden trees [.] I have a villa built at home, which is now also becoming a trend here in Berlin, then I will have a garden laid out like this one [.] " (A. Lichtwark, quoted from: ex. cat. Im Garten von Max Liebermann, Hamburg / Berlin 2004/2005, p. 12).

In 1908, the year our work was created, Liebermann once again spent the summer in the Dutch seaside resort Noordwijk. Here the artist (also in the following summers) created a few atmospheric garden views of a private property he visited, among them "Garten in Noordwijk" (1908, Eberle 1908/36) and "Garten in Noordwijk-Binnen" (Eberle 1909/20), in which Liebermann depicts very similar flower beds with pink flowers, carefully tended lawns and terracotta pots with exotic plants. In partly impasto manner and with passionate, energetic brush strokes and a particularly lively paint application, the artist made a Chinese hemp palm the main motif of the delightful garden scene. Liebermann shows the potted palm tree with shades of green changing in the sunlight, surrounded by dotted, cheerful patches of colors from the flower beds that line the path in front of which he placed an unobtrusive figure staffage. The play of light and shadow continues on the slightly shaded path leading into the depths and thus forms a particularly fine atmospheric summer scene. "His ability to experience with his eyes and to create through them always stayed alive in him with the same energy. (Hans Ostwald, 1930, quoted from: Max Liebermann. Wegbereiter der Moderne, Hamburger Kunsthalle, September 30, 2011 to February 19, 2012, p. 176).
Liebermann did not acquire the spacious lakeside plot of land on Wannsee before 1909, shortly after he had begun with the work offered here. In the following months he not only had a summer residence built here, the today famous Liebermann Villa, but also designed an impressive, multi-layered garden paradise together with Alfred Lichtwark. Integrating artistic and architectural principles, they created a kitchen garden, flower beds, hedges and bushes, trees and lawns merging with the surrounding lake landscape and the villa itself, forming a harmonious unit - following the English concept of the garden as a "living space in the open", just the way he had come to know and appreciate in Noordwijk. From 1910 onwards, the Wannsee garden helped Liebermann to achieve astonishing artistic yield. The result is a comprehensive series of works with a multitude of charming depictions of the magnificent complex, which enriches the artist's early work in a surprising way. The work offered here was created in 1908, before Liebermann acquired the Wannsee property, and is a document of a key moment in Liebermann's oeuvre: the turn to a completely new motif and the beginning of the famous garden pictures work period, which today is considered the climax of his extensive late creative period. [CH]
Ulteriori informazioni
+
Vendere
Desidera vendere un simile oggetto?
+
Registrare di
Max Liebermann
+
Domande sull´acquisto
+
Contattare esperti
211
Max Liebermann
Garten mit Palme und zwei weiblichen Figuren, 1908.
Olio su tela
Stima:
€ 200,000 / $ 232,000
Risultato:
€ 337,500 / $ 391.500
( commissione inclusa)
Ulteriori informazioni
+
Vendere
Desidera vendere un simile oggetto?
+
Registrare di
Max Liebermann
+
Domande sull´acquisto
+
Contattare esperti
Offerte di Max Liebermann
+
tute le offerte
Altre cose che potrebbero interessarti
+
tute le offerte
Max Liebermann - Ogetti venduti
+
tute le offerte