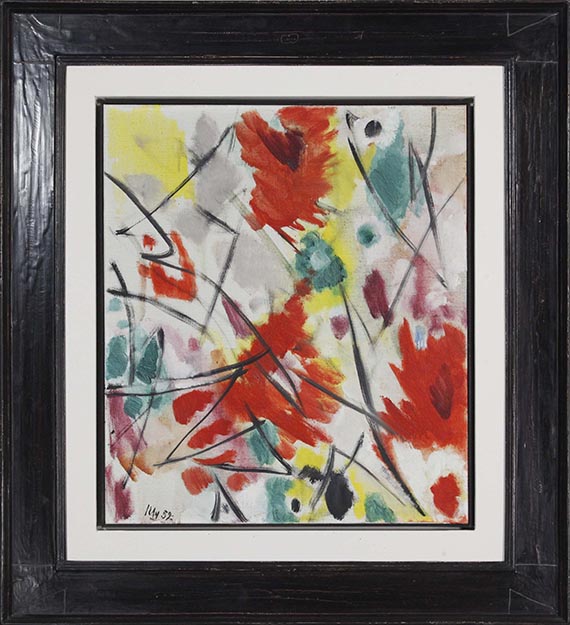 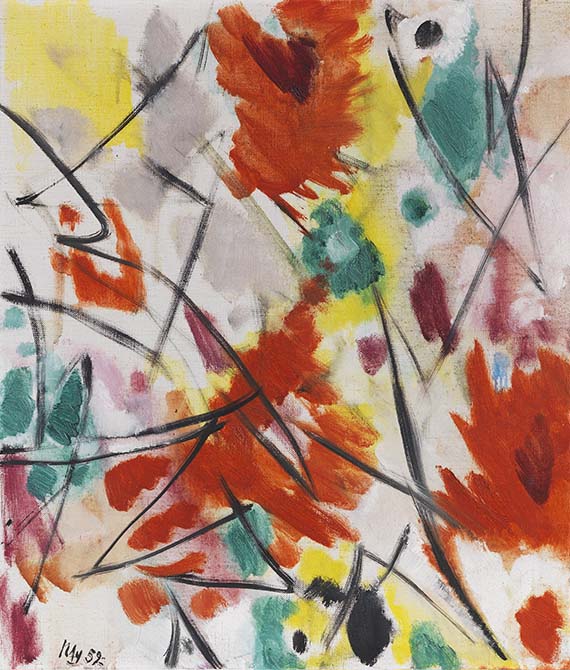 • Marvelous example of Nay's empathy for the order of form and color.
• Bright, radiant and dynamic work from the series of the "Rhythmic Pictures".
• In his entirely abstract works from the 1950s, Nay had found the "most vital liberation of the color" (quoted from: Claesges, p. 11).
• The vibe of the free and light-suffused improvisation "Omikron" is cheerful and elated.
• Part of the same private collection since the 1970s.

It is always fascinating how Ernst Wilhelm Nay manages to express his pronounced empathetic order for color and form with this airy lightness. Comparable in style to a watercolor from 1952 (Claesges 52-110), Nay sets orange-red color nests, contrasts the dominant red of the composition with green spots, which are sometimes framed by a lemon yellow and covered by an irregular network of black strokes. In a 1952 essay entitled "Die Gestaltfarbe" in the magazine "Das Kunstwerk", the artist remarked: "My disposition points to color as a pictorial shape. So color is form. For me, color is design. I don't just give color priority before other pictorial means, but the entire pictorial activity of my art is determined solely by the colored design. […] Color can only be seen through sensation. But these feelings are based on a comprehensive, human ground that contains the colored form." (in: Das Kunstwerk, 6th year, issue 2, p. 4) The tune of the free, light-flooded improvisation "Omicron" is cheerful and lively. If one looks for the formal cause of this impression, it is probably the color elements subdivided into small islands of color, which in their rhythm have the effect of the sound of a cheerful sonata. The spatial placement of the nests of color alone organizes a floating, barely perceptible spatial structure over the light background of the partially unpainted canvas. Ernst Wilhelm Nay organizes a rhythm here that gives the picture its special character; an expressionistic motif with small, blurred, colorful elements. [MvL]
Ulteriori informazioni
+
Vendere
Desidera vendere un simile oggetto?
+
Registrare di
Ernst Wilhelm Nay
+
Domande sull´acquisto
+
Contattare esperti
51
Ernst Wilhelm Nay
Omikron, 1952.
Olio su tela
Stima:
€ 100,000 / $ 116,000
Risultato:
€ 475,000 / $ 551.000
( commissione inclusa)
Ulteriori informazioni
+
Vendere
Desidera vendere un simile oggetto?
+
Registrare di
Ernst Wilhelm Nay
+
Domande sull´acquisto
+
Contattare esperti
Altre cose che potrebbero interessarti
+
tute le offerte
Ernst Wilhelm Nay - Ogetti venduti
+
tute le offerte