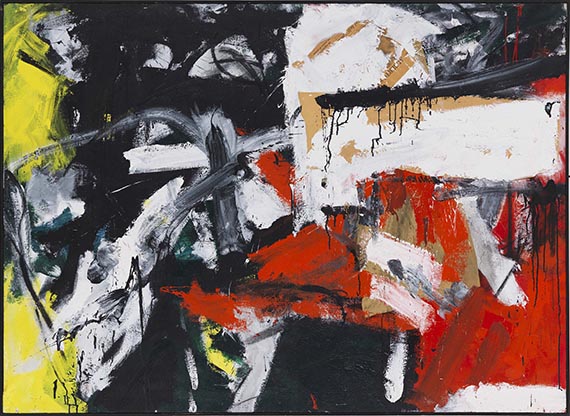 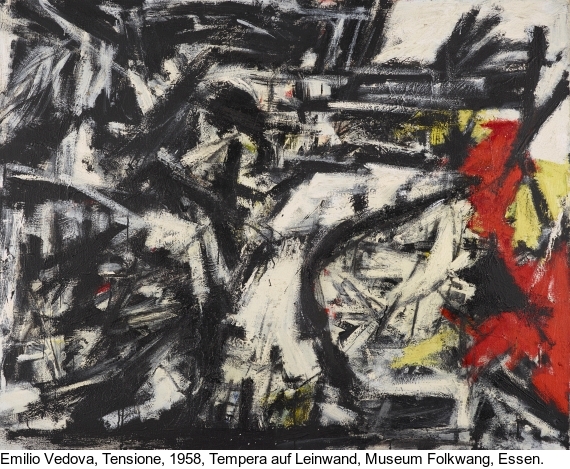 • From the sought-after creative period of the 1960s.
• Emilio Vedova is a main representative of Italian expressive-abstract painting.
• In 1964 and 1982 the artist participated in the documenta.
• Vedova's works are in renowned international collections like the Solomon Guggenheim, New York, the MoMA, New York and Tate, London.

The work is registered in the Fondazione Emilio e Annabianca Vedova, Venice, with the number FV416.

"I always have to get to the picture right away, sometimes with the help of a little leap or a stool [..], when I work I remain in motion, I become physical, I bounce around attacking the canvas and its surrounding space."
(Emilio Vedova)

Emilio Vedova became a main representative of Italian expressive-abstract painting in the 1950s and early 1960s. After a phase characterized by the use of geometric forms, Vedova overcame this liking in favor of a gestural, informal painting between 1950 and 1953. Black and white characterize the artist's work and correspond to a content-related desire for clarity of expression, while strong color accents in red, yellow and sometimes green increase the intensity in works from around 1960, and define the formal orientation of the dynamic structures. Vedova's attitude and artistic approach show close parallels to American Abstract Expressionism and the more radical Action Painting, an utmost most direct and dynamic painting style. The vital, free use of color and the permeability of the room light, which eats away at the contours, correspond to old Venetian tradition. (Tintoretto's famous decoration of the Scuola di San Rocco, for example, is one of the artist's great models.) Sometimes the artist mixes the color matter or, as here, paints over scraps of a collaged daily newspaper with vigorous strokes of the brush and makes them almost unrecognizable, in order to use them to emphasize the spatial character. Through direct or indirect collage elements in superimposed layers, Vedova wrests a non-binding nature from a spontaneous, immediately sensual painting that appears to be composed of parts of different pictorial elements. With different brush sizes, the artist applies the colors in a dramatic gesture, leaving behind a picture full of power, full of aggression, thus depicting the painterly staged chaos on the canvas. The black values \u8203\u8203 increase the intensity of the overall effect, defining the formal orientation, which could otherwise easily be obscured by chromatic values. Vedova's performance art, in which time and space interpenetrate, does not permit closed, definite formulations. With spontaneity and immediacy, it gets us involved in the rebellion of emotions, in their restlessness, inner turmoil and dialectical contradictions. Vedova's work is always the result of an existential concern, which is communicated in his work and his person and which may not least be one of the main reasons why Vedova was able to become an important integrative figure for a younger generation of neo-expressive painters. And although Vedova has been recognized as a classic of non-representational painting within the international art scene since the late 1950s at the latest, it seems that he never accepted the both convenient and arbitrary schema of informal abstraction. For Vedova, his painting shows no formal system, no perfect technique, it is not arbitrarily variable, no virtuoso finger exercise, for him painting arises from existential necessity, it is the only viable possibility for him to come to terms with his situation in a deeply endangered world through productivity.