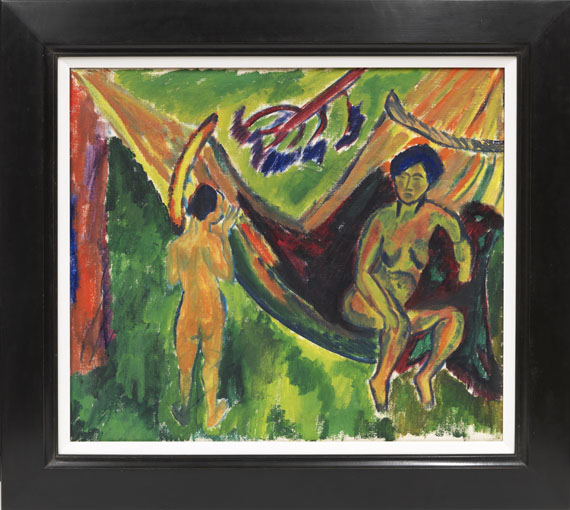 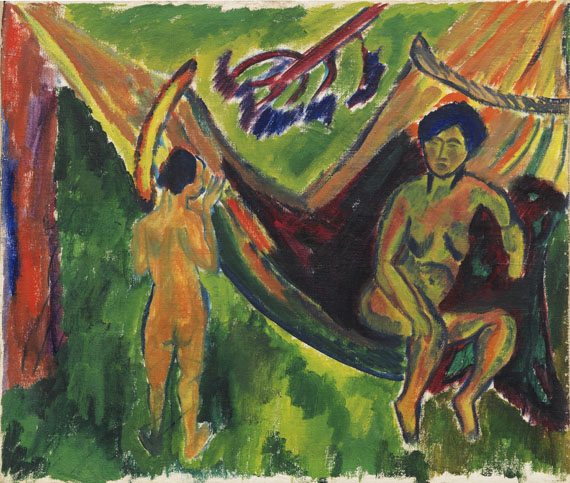 • A masterpiece that Pechstein made at the peak of the "Brücke".
• Document of the intensive artistic cooperation and the mutual influence of the "Brücke"-Künstler.
• A painting with two front sides - each side has its own comprehensive exhibition history.
• With striking expressive colors.
• Liberated from all academic constraints, free and easy nudes in untouched nature came into existence at the Moritzburg Lakes.
• "Boote auf der Ostsee" is an expressive painting from the important series of the Baltic Landscapes.
• The artist's agitated spirit in the year 1922 – separation from Lotte and a legal dispute with Gurlitt - is reflected by the painting's subject.

"We, that is Heckel, Pechstein and me, are in Moritzburg again. There is nothing more delightful than plein-air nudes."
Letter to Schiefler, July 19, 1910, quoted from: Soika vol. 1, p. 16.

In der Hängematte (Hammock), 1910
On July 18, 1910, Hermann Max Pechstein traveled to Moritzburg with Erich Heckel and Ernst Ludwig Kirchner. The idea of a joint summer trip to Moritzburg came up spring: "When we were together in Berlin, I agreed with Heckel and Kirchner that the three of us should work on the lakes around Moritzburg near Dresden. We had known the place for a long time, and we knew that there was the opportunity to paint nudes in the open air without being disturbed." (quoted from: Hermann Max Pechstein, Erinnerungen, 1993, p. 41) The "Brücke" artists spend an idyllic summer with their friends and models painting and swimming in the lakes in the remote Moritzburg forest region. "We painters set off early in the morning, heavily laden," Pechstein later recalls, "the models followed behind with bags full of things to eat and drink. We lived in absolute harmony, worked and bathed. If we didn't have a male model, one of us jumped in" (Max Pechstein, in: Junge Kunst, Vol. 1, Leipzig 1919.) It was important to the "Brücke" artists that their models were not professionals. They should move naturally and not fall into the rigid poses demanded by academic painting. They threw themselves into the work and "on the natural appeal the girls had, .. who we drew in free naturalness without poses or anything else" (EL Kirchner, quoted from: Lothar Grisebach, Ernst Ludwig Kirchners Davoser Tagebuch, 1997, p. 63) Moritzburg, which was not a tourist destination, and the close community provided the perfect setting for intensive work. The result is haunting works that, in their direct density, testify to the painter's bond with life in the great outdoors. The artists worked together for a month in Moritzburg. This summer would be a particularly productive time for all "Brücke" artists, including Hermann Max Pechstein: some of his best-known pictures were created there. In a very short time he developed an angular, sketchy style of painting that is related to the compositions of Heckel and Kirchner. By working in close proximity to one another, the styles of the individual artists converged. For the short time of this idyllic month in Moritzburg, the works of each individual artist reached a new level and they developed a visual language that was henceforth referred to as the "Brücke" style and it marked the peak of this artist group. In particular, the depiction of nudes at the water or in the forest has become the epitome of the artists' expressionist heyday. The casual nudity is an expression of a liberation from inner constraints, which also visibly flows into the creative work. Nature and man form a sought-after unity that is vividly conveyed to the viewer. In seclusion, they put their idea of a simple, "primitive" life into practice. The feeling of being one with nature and living a simple life close to that of the "primitives" was an ideal the "Brücke" artists apired at the time. What all the works the artists created in Moritzburg have in common is the directness and immediacy of expression. Pechstein's work "In der Hängematte" also shows a verve that was hardly known before. [SM]

"In April 1921 I set out for my quest, just me with the bare neccesities in my satchel. According to the map, there was a similar spit between Lake Leba and the Baltic Sea in Eastern Pomerania [..] I did not just come to like the coast, I loved it."
Max Pechstein, Erinnerungen, pp. 107/108
Boote auf der Ostsee (Boats on the Baltic Sea)
Hermann Max Pechstein always wanted to be close to the sea. For many years Nidden was his place of longing, but after the Treaty of Versailles in 1919 it became part of Lithuania and with the changed political situation, Pechstein felt alienated. Even after the "Brücke" period, he was still looking for a natural originality for his paintings, also as a contrast to busy Berlin, where the artist lived with his family. In contrast to Nidden, the Pomeranian Leba could be reached by train within just a day. In 1921, Pechstein spent the summer in Leba with his wife and child for the first time. He was fascinated by the special light ambiance and the changing weather phenomena in this coastal region, and felt a special connection to the landscape and its people. In contrast to the hectic Berlin of the years after the First World War, he seemed to have found the longed-for ideal of a peaceful life there. The stays in Leba on Lake Leba in Pomerania would be of formative importance for Max Pechstein's painterly work. Here he developed his own style, which is characterized by the reality of seeing. The works of this time are stylistically still determined by a traditional Expressionism, which became particularly manifest in the color values. The originality of this almost untouched landscape characterized his painterly work of this time in a particularly rich way. The intense engagement with nature lea to a series of impressive landscapes in which the painter captured his feelings in a special way. Life in the midst of untouched nature exerted an enormous fascination on him. "Nature has always been important to me in my work and my intense studies of it forms are milestones. I liberate myself working on nature and can, like through a filter, render the whole experience on paper or canvas." (Max Pechstein, in: Künstlerische und kulturelle Manifestationen, Ulm no year [1924], p. 38) Hermann Max Pechstein's entire artistic work is particularly closely linked to the sea and maritime life. Pechstein's maritime journeys not only allow the artist to capture bathing scenes, the working life of the local fishermen, docking ships, barges and boats on the high seas, coastal landscapes and beach impressions on the canvas, but also individual impressive sea pieces in which he shows the dynamics, versatility and power of the surging, breaking waves caused by gusty winds. Here it is the storm-tossed sea and the boats in rhythmic line returning to port that interests him. Time and again Pechstein captured the atmospheric weather phenomena on the coast, which testify to his deeply felt love for pristine nature. [SM]
Ulteriori informazioni
+
Vendere
Desidera vendere un simile oggetto?
+
Registrare di
Hermann Max Pechstein
+
Domande sull´acquisto
+
Contattare esperti
44
Hermann Max Pechstein
In der HÃ€ngematte/Boote auf der Ostsee (RÃŒckseite), 1910/ 1922.
Oil on canvas, painted on both sides
Stima:
€ 300,000 / $ 348,000
Risultato:
€ 400,000 / $ 463.999
( commissione inclusa)
Ulteriori informazioni
+
Vendere
Desidera vendere un simile oggetto?
+
Registrare di
Hermann Max Pechstein
+
Domande sull´acquisto
+
Contattare esperti
Offerte di Hermann Max Pechstein
+
tute le offerte
Altre cose che potrebbero interessarti
+
tute le offerte
Hermann Max Pechstein - Ogetti venduti
+
tute le offerte