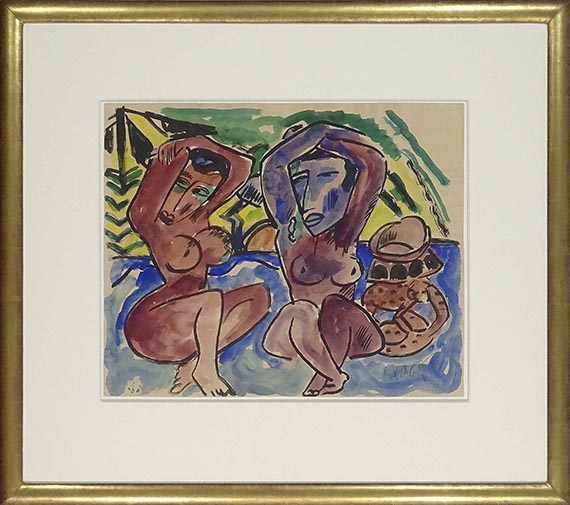 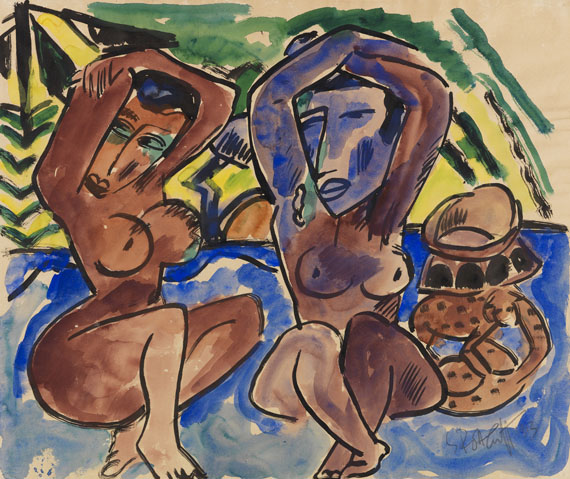 • Schmidt-Rottluff encountered the art of non-European cultures as early as during the years in Dresden and he began to compile an own collection in 1913 the latest.
• Objects of African or Oceanian origin became pictorial objects, as it is the case here with the leopard caryatid from Cameroon.
• These early documents of the fascination for the exotic are extremely rare on the international auction market.
• Part of the important retrospective exhbition at the Lenbachhaus.

This watercolor is documented in the archive of the Karlaund Emy Schmidt-Rottluff Foundation, Berlin.

"I took heads - in relation to other physical features - to extremes, as a point of concentration of the psyche, of all expression.“
Karl Schmidt-Rottluff to Gustav Schiefler, around 1912

Schmidt-Rottluff was constantly in constant contact with Gustav Schiefler. And thus the artist responded to questions the Hamburg judge, art collector, patron and art critic has about his monumental nudes and their creation. "I have come to an increase in form through various paths," says Schmidt-Rottluff, "which may contradict the proportions found in natural science, but which is balanced and proportional in its spiritual relationships. In relation to other body forms, I have increased heads enormously as they are a concentration point of the psyche, of all expression. In their mental motion, all other body forms follow the head, gather in it, and so the form grows large all by itself. It is no different with the breasts. They are an erotic moment that I would like to detach from the ephemerality of the experience, to create a relationship, so to speak, between the cosmic and the earthly moment. Perhaps one could say it is an eroticism heightened into the transcendental. That sounds a bit mystical in our time, which is riddled with cynicism, but what has art history left us with over the course of time – Egypt, Michelangelo – that gives them their immortality: it is the experience of transcendental things in the earthly." (Quote from: Gerhard Wietek, Schmidt-Rottluff, Graphik, Munich 1971, p. 100).
This declaration goes hand in hand with the artist's intensive preoccupation with art from non-European cultures, which Schmidt-Rottluff had already encountered in his Dresden years. His passionate interest in primal sculpture is not only expressed in the correspondingly modified physiognomies or the bodies of his figures. Objects of African or Oceanic origin became pictorial objects themselves, such as this leopard caryatid from Cameroon, which is conspicuously staged next to the two dark-skinned women in an unusual pose. At that time, Ernst Ludwig Kirchner owned a leopard stool. This mysterious stool by the Bamileke artists, which accompanied Kirchner for a good 30 years and enlivened his world of motifs particularly in the years between 1910 and 1912, may also have had a stimulating effect on Schmidt-Rottluff to present it here in a knowledgeable and at the same time reservedly dominant manner. [MvL]
Ulteriori informazioni
+
Vendere
Desidera vendere un simile oggetto?
+
Registrare di
Karl Schmidt-Rottluff
+
Domande sull´acquisto
+
Contattare esperti
31
Karl Schmidt-Rottluff
Zwei Akte mit Negerplastik, 1913.
Watercolor and India ink
Stima:
€ 70,000 / $ 70,000
Risultato:
€ 150,000 / $ 150,000
( commissione inclusa)
Ulteriori informazioni
+
Vendere
Desidera vendere un simile oggetto?
+
Registrare di
Karl Schmidt-Rottluff
+
Domande sull´acquisto
+
Contattare esperti
Offerte di Karl Schmidt-Rottluff
+
tute le offerte
Altre cose che potrebbero interessarti
+
tute le offerte
Karl Schmidt-Rottluff - Ogetti venduti
+
tute le offerte