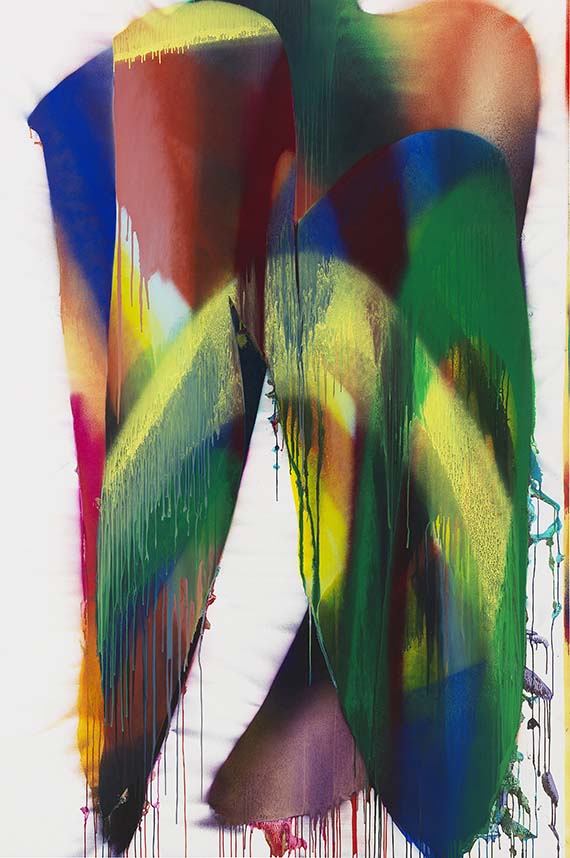 • This large-sized work in the characteristic refined spray technique represents Katharina Grosse's monumental spatial installations that helped her to great international success.
• The year our work was made, Grosse showed numerous works in a comprehensive solo show at the Museum Frieder Burda in Baden-Baden and also transformed a building in New York into an artwork in context of the exhibition series "Rockaway!" organized by MoMA PS1 in 2016.
• The following year she had year final breakthrough with her first exhibition at Gagosian Gallery in New York.

PROVENANCE:
Gagosian Gallery, New York (with the gallery label on the reverse).
Private collection France (acquired from the above).

"I think color is of course the centre, the core of my thinking, my acting, my main material. It has also been the guideline throughout all the development that I have made as an artist."
Katharina Grosse in an interview with Marc-Christoph Wagner for the Louisiana Museum in Humlebæk in August 2020.

"As a child, I always played a game with myself: in the morning before I got up, I had to ‘paint‘ away all the shadows on the wall, on the window sill or the lamp with an invisible brush. I became obsessed with it. Looking at the world has always been connected to doing something in it, with it or on it at the same time. Painting enables the simultaneity of imagining and acting in an unusual way, because there is no transmitter between me and my tools." The artist shares this memory in a conversation between with Hans Ulrich Obrist (quoted from: Kunstforum, vol. 268, p. 60).

Katharina Grosse is primarily associated with her spatial works that cover walls and furnishings, interior and exterior surfaces or three-dimensional bodies. The exhibition "Katharina Grosse. It Wasn't Us", in which the artist transformed the historic hall and the outside area of the Hamburger Bahnhof - Museum für Gegenwart - Berlin into an expansive picture, is just one late example. In any case, with these spatial works, Katharina Grosse left the conventional pictorial space by including the environment in the color design. This enables a completely new perception of space. Coating surfaces with colors takes the world into another sphere and frees it from reality. The "brush" she uses is the paint spray gun. It is also remarkable that Katharina Grosse creates transient works as the painting only exists for the duration of the respective exhibition. The resulting space of imagination is therefore only a short dream in the large time window of art history. Katharina Grosse's contribution to the Rockaway Beach revitalization project at MoMA PS1 shows that in every transience there is also a new beginning. In 2012, Hurricane Sandy destroyed a former military building, and the changing water levels on Atlantic coast of Queens did the rest. With her spray gun, Grosse transforms this ruin into a landmark that shines from afar. Her basic idea is that, despite its devastation, this ruin shows what we need, a basic structure that offers us protection. The artist made this clear from afar and thus set a sign of hope.

The extent of Katharina Grosse's painting to space is repeatedly addresses. What Katharina Grosse places demands from the screen is no less interesting. The artist worked with brushes and broad brushes until around 1998. The superimposition of colors was also at the core of her early works. The technique she uses on the relatively small canvas is the same as in the large spaces: she sprays, her "brush" is the paint spray gun. Stencils are also used in the two-dimensional picture, with which forms are limited, i. e. exactly the opposite of the overarching spatial painting. Color areas superimposed on one another emerge in a fine mist, which sometimes unite to form small islands of color or color trickles, or unite to form new colors. The result is an imaginative space that opens up a wide range of possibilities. The indifferent nature of the surfaces in particular contributes to this. The aim of the paintings is not to expand the given pictorial space, i. e. the format given by the canvas. Rather, the act of painting is in the foreground for Katharina Grosse. She sees painting as a processual practice, permeated by flow and resistance, both mentally and physically. Color landscapes are created on the canvas, which are developed in a process-oriented manner, conjuring diverse associations. This association is even freer in the panel painting than in the monumental works that always stand in the context of a certain location.
Even though the artist may not have intended that, an angel's torso may be as possible association in our picture. In contrast to many other paintings by Katharina Grosse, it is airy and free from aggression. Here she has - to tie in with Katharina Grosse's childhood memories - painted a magnificent and light picture over all the shadows. [EH]
Ulteriori informazioni
+
Vendere
Desidera vendere un simile oggetto?
+
Registrare di
Katharina Grosse
+
Domande sull´acquisto
+
Contattare esperti
64
Katharina Grosse
Ohne Titel, 2016.
Acrilico su tela
Stima:
€ 180,000 / $ 208,800
Risultato:
€ 400,000 / $ 463.999
( commissione inclusa)
Ulteriori informazioni
+
Vendere
Desidera vendere un simile oggetto?
+
Registrare di
Katharina Grosse
+
Domande sull´acquisto
+
Contattare esperti
Altre cose che potrebbero interessarti
+
tute le offerte
Katharina Grosse - Ogetti venduti
+
tute le offerte