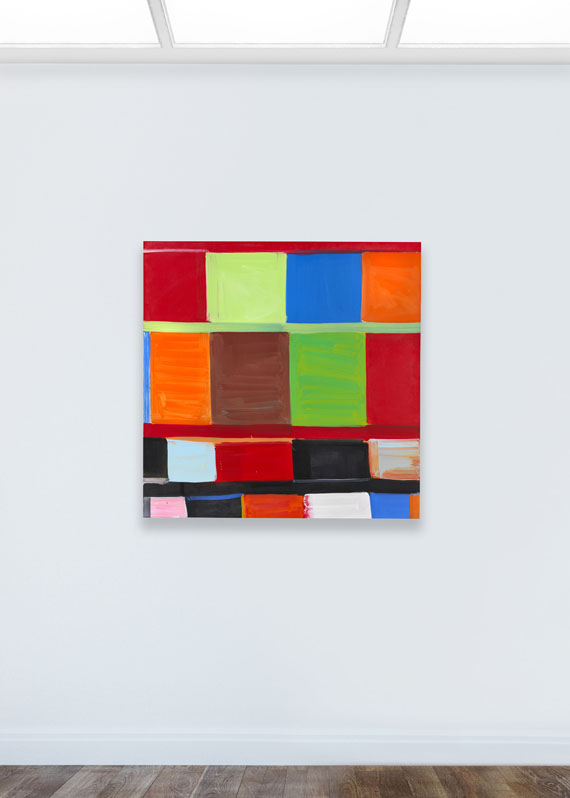 Ingrandire
+
3
Stanley Whitney
N. O. 9th Ward, 2007.
Olio su tela
Stima: € 150,000 / $ 150,000
N. O. 9th Ward. 2007.
Oil on canvas.
Signed and dated "Feb. 2007", titled and inscribed with two direction arrows, as well as with the information "TOP" on the reverse. 102 x 102 cm (40.1 x 40.1 in).
Over the course of this year, Stanley Whitney's works were shown in, among others, a side event of the 59th Venice Biennale at Palazzo Tiepolo Passi (Stanley Whitney. The Italian Paintings, until November 27, 2022).
• This is the first time that a painting by the internationally acclaimed artist is offered on the German auction market (source: artprice.com).
• Similar paintings by the artist are at, among others, the Metropolitan Museum and the Solomon R. Guggenheim Museum in New York
• In 2017, Whitney participated in documenta 14 in Kassel.
• Whitney joined the renowned Gagosian Gallery in 2022.
• In 2024 the Buffalo AKG Art Museum will honor the artist with a first comprehensive retrospective exhibition.

"And then there’s the music, you know? The music, for me, was always there, this kind of rhythm, getting rhythm, having rhythm. People find my paintings kind of odd, because of the rhythm. [..] The idea of having something be so still but have it be so rhythmic.“
Stanley Whitney in an interview with Louise Neri 2020, Gagosian Gallery, www.youtube.com/watch?v=MpapjlTPmJE.

For many years, Whitney's impressive artistic work received surprisingly little attention. However, this would change dramatically, especially with his participation in documenta 14 in Kassel in 2017. Subsequently his works were shown in solo exhibitions at the Modern Art Museum in Fort Worth (2017) and at the Palazzo Tiepolo in Venice (2022). For 2024, the Buffalo AKG Art Museum (formerly Albright-Knox Art Gallery) in Buffalo, New York, plans to show a first comprehensive retrospective of his work. Whitney has recently been represented by the renowned Gagosian Gallery, New York.

The today 76-year-old artist studied in the 1960s and early 1970s, first at the Kansas City Art Institute and then at Yale University, where the Institute of Fine Arts used to be under the direction of Josef Albers in the 1950s. In terms of artistic commitment, his decade-long passionate examination of the color effects of the square is quite similar to Stanley Whitney's way of working. Since the early 1990s, the painter has devoted himself to the disciplined, intensive elaboration of a specific formal composition, his meanwhile characteristic, recurring grid structures that he gradually fills with strong, saturated, densely arranged blocks of color. In addition, the canvases are always structured by three to five horizontal stripes of color.

It is precisely these works that Whitney describes as the beginning of his mature work. Stays in Egypt and Italy in the early 1990s were decisive, formative factors, and have a lasting impact on the structure of his paintings and the way he thinks about structure and composition, as well as the relationship between color and geometry. Whitney toured the pyramids and visited, among others, Naples and Rome. He studied the architecture of the historic buildings, their construction with stacked blocks of stone and the facades with closely spaced windows such as that of Palazzo Farnese (fig.). While the artist still left a certain blank space between the color fields in his previous works, and in some cases still integrated gestural elements in earlier works, he then created works in which no longer rounded but angular, squared shapes in bright, strong colors are joined together : "The space is in the color," explains Whitney (in an interview with Louise Neri, Gagosian Quarterly (online), April 10, 2020).

Despite the given grid structure, Whitney's painting is anything but rigid and does not follow any restrictive order.“The color makes the structure. [..] I wanted a system that allowed me to lay color down when I felt like it – I wanted nothing to get in my way. When I start these paintings I have no idea what it’s going to be. I don’t start with a sketch or an idea.“ (Stanley Whitney in a talk with Arunda D'Souza, May 30, 2017, quoted from: www.artnews.com/art-news/news/the-color-makes-the-structure-stanley-whitney-paints-a-picture-8418/). The structure on which the works are based even liberates Whitney in his working method, which is characterized by a specific rhythm and a noticeable dynamic. He works his way color block by color block and row by row from the top left corner down to the bottom right. "A color calls another color", explains the artist (in an interview with Alteronce Gumby, Oral History Project, 4/21/2014. Quoted from: www.bombmagazine.org/articles/stanley-whitney/). The tonality of each completed color block determines the following color block: a process that the music lover Whitney compares to the "call and response" principle between two solo instruments in jazz. The way he improvises when he applies the paint is also reminiscent of jazz music, in which improvisation is one of the key elements. The musical concept of harmony also plays a major role in Whitney's work, because it is basically about harmony and disharmony, the interaction of colliding, adjacent color values, that determine his compositions. 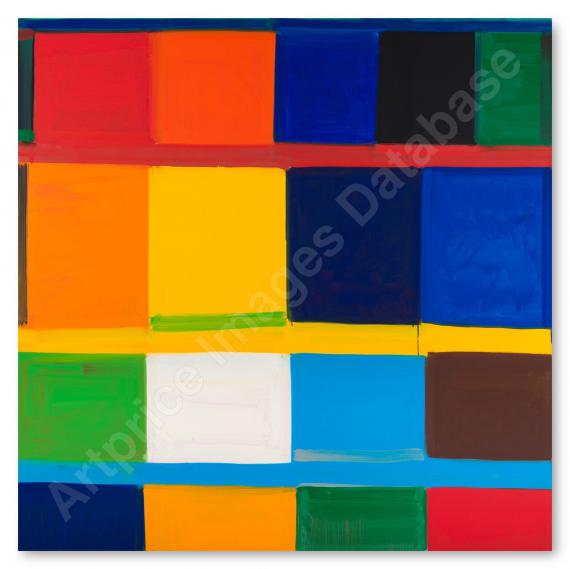 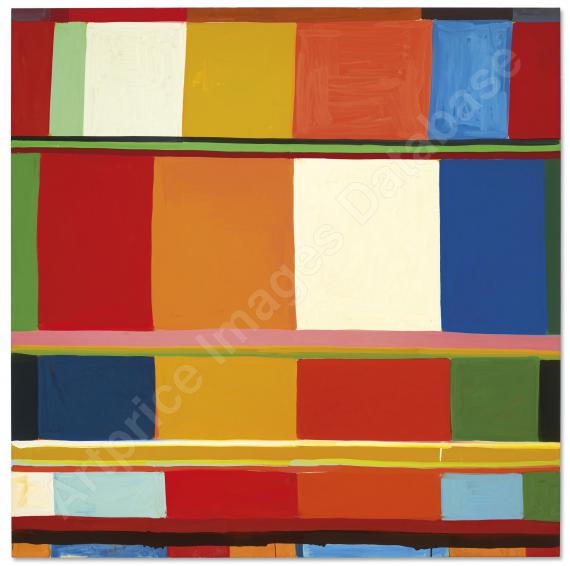