• Owing to the clearly visible color application, the work shows the artist's signature style.
• Presumably made after the seminal exhibition "Le Vide" (Void) at Galerie Iris Clert in Paris.
• Other "IKB" works from the years 1958/59 are at, among others, the London Tate Modern, the Fondazione Prada in Milan, the San Francisco Museum of Modern Art (SFMOMA), the Moderna Museet in Stockholm and the Sezon Museum of Modern Art in Karuizawa-machi/Japan.
• Unusual landscape format with a strong gravity.

LITERATURE: Paul Wember, Yves Klein, Cologne 1969, p. 74.
"The monochromes were more difficult for audiences to get into; certainly no one at the time had seen anything like them before. And they were certainly considered a provocation by the post-war art establishment in Paris [..]. Even now they are not easy to 'understand', because they require an investment on the part of the viewer. You have only the color - there's no action. There's no story."
Daniel Moquay, Leiter Yves Klein Archive, Paris, quote from: Yves Klein: "He had no limit", www.christies.com/features/What-inspired-Yves-Klein-9153-3.aspx.

Essay
Yves Klein is considered one of the most innovative artists of the 20th century owing to his completely new color experiments and the reinterpretation of the classic concept of painting in the 1950s. At a young age he experimented with the effects of individual colors, using, among others, pure orange, red, yellow or blue while making efforts to differentiate between happy, sad, tender, violent, vulgar and majestic colors. His subsequent radical turn to pure monochrome painting was not only met with enthusiasm, but also with great rejection. Contemporary viewing habits saw the monochrome works as a provocation, because they questioned the previously generally valid conception of art. But Yves Klein remained utterly committed to monochrome pure colors and henceforth called himself "Yves Le Monochrome". Yves Klein published the artist's book "Yves Peintures" as early as in 1954, in which - basically as a mock catalog raisonné - he depicts an abundance of purely monochrome images and thus laid the foundation for his artistic career. In 1957, in the important solo exhibition "Proposte monochrome, epoca blu" (monochrome proposal, blue epoch) in the Galleria Apollinaire in Milan, he presented his deep, now famous ultramarine blue for the first time, which would soon become his trademark and which he developed as I.K.B. in in 1960 – short for International Klein Blue, a color he even had patented. In 1958 the Paris gallery Iris Clert showed the seminal solo show "Le Vide" (The Void), which led to another peak in his only seven year long artistic career. For the exhibition, all objects except for the empty showcases were removed from the small exhibition area of the Paris gallery. Klein painted the walls white, had a voluminous blue curtain draped in front of the entrance to the gallery, sent out invitations with monochrome blue stamps created by the artist (which are still traded on the auction market today) and served a blue-colored cocktail on the evening of the open reception. The successful collaboration between Yves Klein and Iris Clerts was repeated the same year. Together with Iris Clert, the architect Werner Ruhnau and other artists, Yves Klein developed several monochrome-blue wall reliefs for the artistic design of the new music theater in Gelsenkirchen - probably the most monumental examples of his monochrome art. Yves Klein explains: "For me, the art of painting consists of creating freedom. [..] Feeling the soul without explaining .. that's what led me to monochrome painting." (quote from: Paul Wember, Yves Klein, Cologne 1969, p. 11). Instead of focusing on the expressiveness of painting or its narrative abilities, the artist was always concerned with evoking feelings – if possibly also spiritual sensation. The image carrier is completely dematerialized, the viewer doesn’t have to put up with decrypting the picture, but rather immerses himself in a deep blue, enters an almost meditative state. In the present work, Klein allows his image to sport the monochrome "Yves Klein Blue" in his artistic script. Thick brushstrokes with a lot of paint, deliberately set next to and above one another, remain visible. In their top down arrangement they develop a captivating rhythm and evoke an impression of motion. All in line with the goal he had set in the early 1950s, Klein also succeeded in creating pictures of great painterly sensitivity and noticeable poetic energy in the small-format "Momochromes bleus" like it is the case with the work offered here. [CH]
Ulteriori informazioni
+
Vendere
Desidera vendere un simile oggetto?
+
Registrare di
Yves Klein
+
Domande sull´acquisto
+
Contattare esperti
255
Yves Klein
Monochrome bleu sans titre, 1958/59.
Pure pigment and Synthetic resin on board
Stima:
€ 200,000 / $ 234,000
Risultato:
€ 300,000 / $ 351.000
(25% commissione inclusa)
Ulteriori informazioni
+
Vendere
Desidera vendere un simile oggetto?
+
Registrare di
Yves Klein
+
Domande sull´acquisto
+
Contattare esperti
Altre immagini 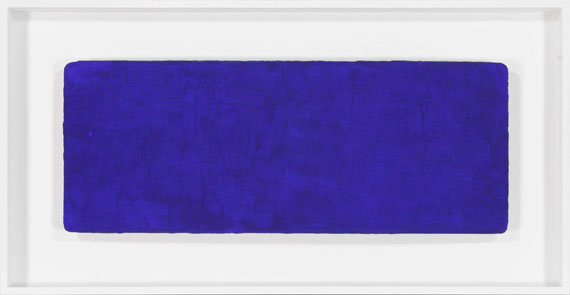 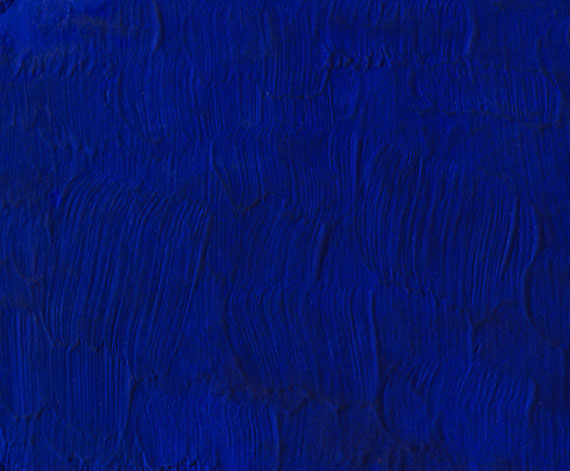 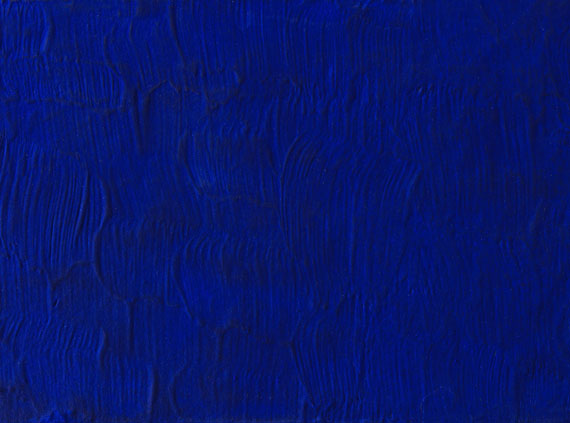