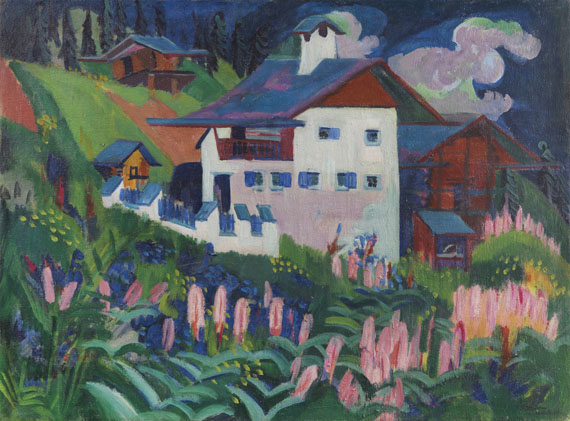 PROVENANCE: From the artist's estate.
Ever since family -owned.

LITERATURE: Gustav Schiefler, E. L. Kirchner in Davos, in: Das Kunstblatt, special issue Ernst Ludwig Kirchner, VII/3, 1923, p. 84 with black-and-white illu. (before the revision through ELK)
Lucius Grisebach, Ernst Ludwig Kirchner. 1880-1938, Cologne 1995, p. 174.
Magdalena Moeller/Roland Scotti (editors), Ernst Ludwig Kirchner. Gemälde, Aquarelle, Zeichnungen und Druckgraphik. Eine Ausstellung zum 60. Todestag, Kunstforum Wien, December 8, 1998 - February 28, 1999; Kunsthalle der Hypo-Kulturstiftung, Munich, March 12 - May 30, 1999, ex. cat. with illu. on p. 67.
"I am spending my days in Frauenkirch at peace and at ease. I'm trying to make the gained images above visible, in order to pass an exhibition with honors. I might even be able to fill this year's exhibition exclusively with images I made here, as there surely is no lack of thereof [..]."
Kirchner to Henry van de Velde on October 13, 1918, in: Ernst Ludwig Kirchner, Briefe an Nele, Munich 1961, p. 92.
"The huts down here are a strong Parisian blue and stand on a yellow meadow. Only here does one start to learn about the value of every color, in addition to the austere monumentality of the mountains. There is this unbelievable, tranquil calmness. I will now try and complete my unfinished works in the warm and cozy Grisons chambers.“
From a letter by Kirchner to Nele van der Velde, quote from: E.L. Kirchner. Briefe an Nele, 1961, p. 9.

Essay
Life in the mountains
Life of shepards with their animals on the alps turn into Kirchner's central theme. On May 8th 1917, Kirchner arrived in Davos for the second time in order to "complete his cure", as written in a letter to his architect friend Henry van de Velde. During the summer Kirchner lived with a nurse in the "Rüesch hut" on the Stafelalp above Frauenkirch. Although he temporarily suffered from paralysis and was unable to write letters himself, he created landscapes and depictions of his new surroundings that are characterized by an unbroken, elementary combative virtue. However, Kirchner continued to suffer from nightmarish fears and restless nights. After a visit to the Stafelalp, Henry van de Velde was able to persuade Kirchner to confide in the psychiatrist and psychoanalyst Ludwig Binswanger, and from mid-September of 1917, Kirchner spent ten months at the Bellevue sanatorium in Kreuzlingen on Lake Constance. Following his stay at the sanatorium in Kreuzlingen, Kirchner returned to Davos in July of 1918 and lived in a hut on Stafelalp owned by the mountain farmer Martin Schmid. He moved into a winter-proof farmhouse as late as the end of September, into a building which was part of the farmstead “In den Lärchen”. It was above the “Längmatte” in Frauenkirch and owned by the Müller family. Kirchner strongly identified with his immediate surroundings and lived the life of dairy farmers and shepherds with animals on the alpine pastures; he photographed the landscape and people around him, who approached him with curiousity and benevolance: the eccentric one from Berlin.
Our house "In den Lärchen"
The house "In den Lärchen", a Grisons farmhouse, is located on the southern edge of the Stafelalp on a large meadow. Alongside his partner Erna Schilling, Kirchner lived on the building's lower floor at first, until January 1919, when they moved into the entire house. The farmhouse houses three bedrooms, a kitchen and a large entrance hall, whereas the property contained a barn, a well and a beehouse.
“In this way, I live down here in Frauenkirch very calmly and fully well cared for, trying to make the impressions gained up there legible enough so that I will be able to pass my exhibition with honors. I might even be able to fill this year's exhibition exclusively with images I made here- there is no shortage of material, only the execution is difficult. I live in a beautiful old house with a kitchen like Rembrandt's studio." (Kirchner to Henry van de Velde on October 13, 1918, in: Ernst Ludwig Kirchner, Briefe an Nele, Munich 1961, p. 92). The painting “Unser Haus”, titled and dated in large letters on the backside, was presumably painted by Kirchner in 1918. He did not begin execution before the summer of 1919 however, and may have changed some details from 1920 on. The painting depicts a whitewashed house with three utility buildings and a stone wall surrounding the garden. Placed infront of it is a field of blooming lupines, whose early summer colors sprawl with the color of day. A green slope with red blemishes rises steeply behind it, leading up to a row of dark fir trees alongside one of the multiple neighboring mountain huts crouching in front of it. Kirchner ’exagerates’ the “Lärchen” house: the windows appear smaller than they actually are, the base of the lower ground floor is higher and enclosed by a fortified garden wall. In the article “E. L. Kirchner in Davos" for "Das Kunstblatt. Sonderheft Ernst Ludwig Kirchner "(VII / 3, 1923, p. 84) in 1923, Gustav Schiefler, Hamburg judge, art collector, art critic and author of the catalog raisonné of Kirchner's prints, published an photograph shot by Kirchner after he first completed the artwork in 1923. When viewed in comparison, a revision of his ouevre is noticable, an action Kirchner commonly carried out in multiple artworks. Due to Kirchner's devtion to objectifying motifs, he later altered the cottage garden, the accentuation on the lupines’ dense pink candle, details of the architecture and the extensive contraction in the background. Hereonafter, Kirchner increasingly developed his Davos style and moved further away from the original "Metropolitan Expressionism" of the Dresden and Berlin days.
An artistic transition
Despite his psychological struggles and partial paralysis, Kirchner was extremely productive in Davos in the summer of 1917 and from the summer of 1918 on. Every single place of residence is linked to a multitude of works, and the versatility of the media used is also quite astonishing: In addition to some quite large oil paintings, he created many series of woodcuts and etchings, watercolors and drawings, as well as life-sized wooden sculptures. Kirchner began to make wood carvings produced all kinds of furniture and utensils, such as stools, chairs, bed frames and bowls. He would create large wooden reliefs out of sketches and inspired individuals to create carpets based on his motifs. The artist's large entrance hall became a stage for eventful, informal encounters with large farmer families living in the neighborhood, as well as for guests visiting Kirchner in the secluded mountains. The latter included Henry van de Velde with his daughter, the artist Nele, the dancer Nina Hard and his brother Walter Kirchner. Much like in Dresden or Berlin Kirchner knew how to transform his studio and his domestic environment into a familiar, albeit exotic place, to invite people to linger and to create artistic motifs. With the stabilization of his health and living conditions, his mental state also improved. “Unser Haus” is a wonderful example of the beginning change in Kirchner’s style, which he himself compared with the structure of oriental carpets. The colorful motif starkly emanates the profound satisfaction and growing self-confidence in what he had achieved; in a life that was as much eventful as it was unstable. [MvL]
Ulteriori informazioni
+
Vendere
Desidera vendere un simile oggetto?
+
Registrare di
Ernst Ludwig Kirchner
+
Domande sull´acquisto
+
Contattare esperti
236
Ernst Ludwig Kirchner
Unser Haus, 1918-1922.
Olio su tela
Stima:
€ 500,000 / $ 585,000
Risultato:
€ 1,687,500 / $ 1.974.374
(25% commissione inclusa)
Ulteriori informazioni
+
Vendere
Desidera vendere un simile oggetto?
+
Registrare di
Ernst Ludwig Kirchner
+
Domande sull´acquisto
+
Contattare esperti
Altre immagini 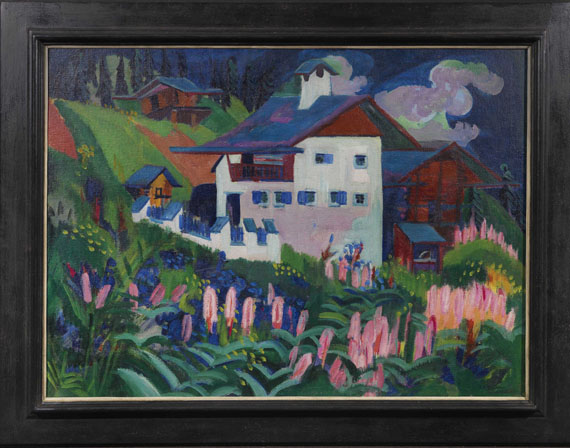 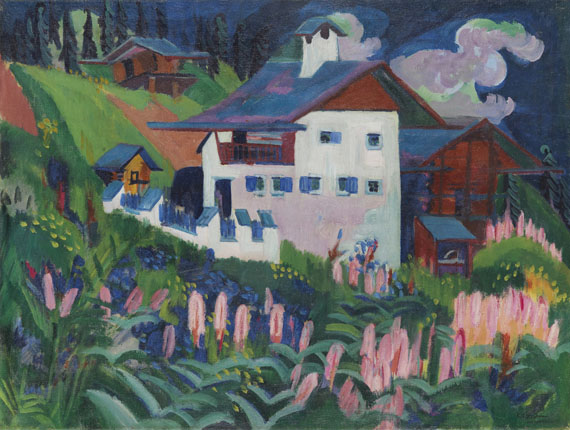 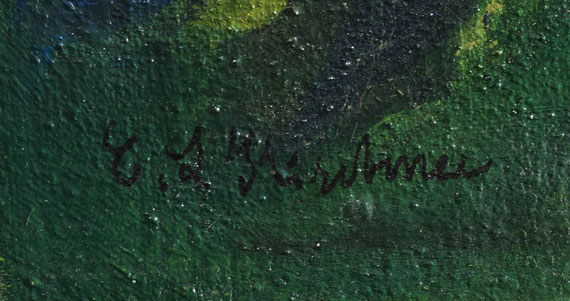 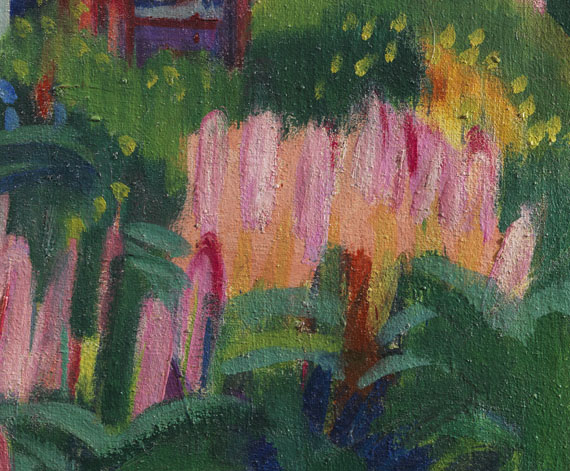 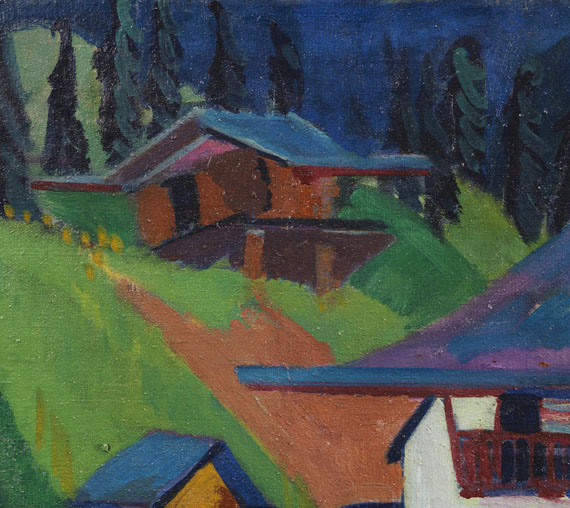 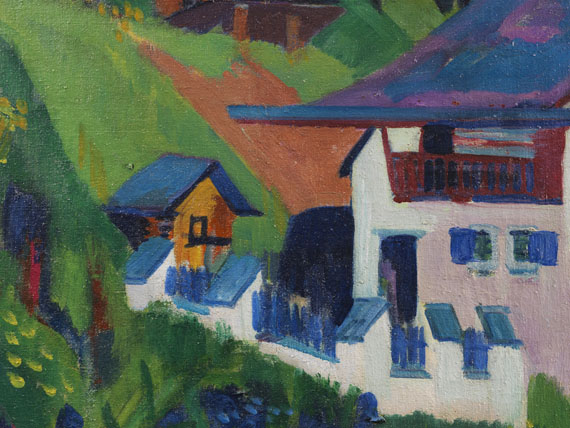 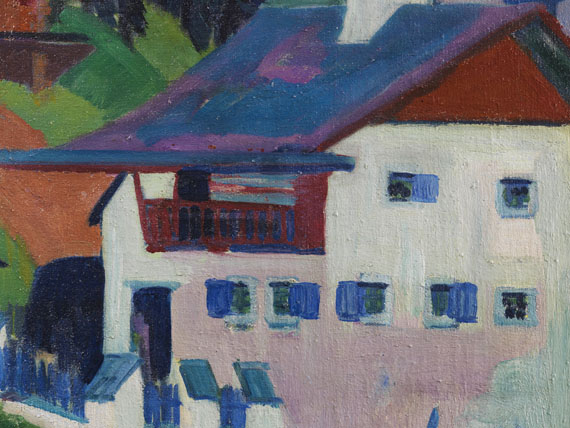 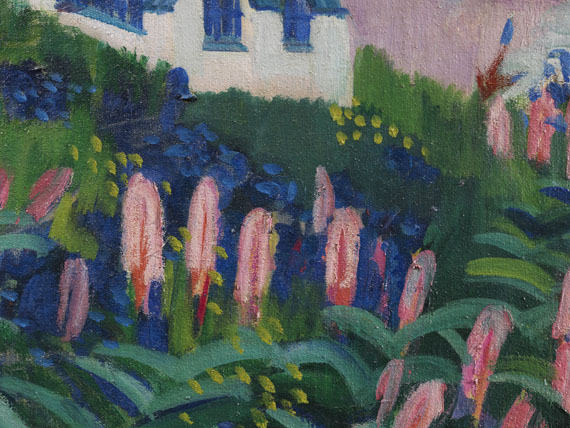 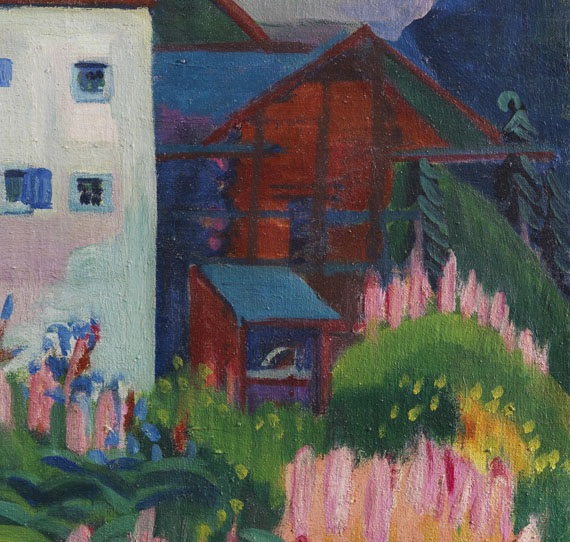 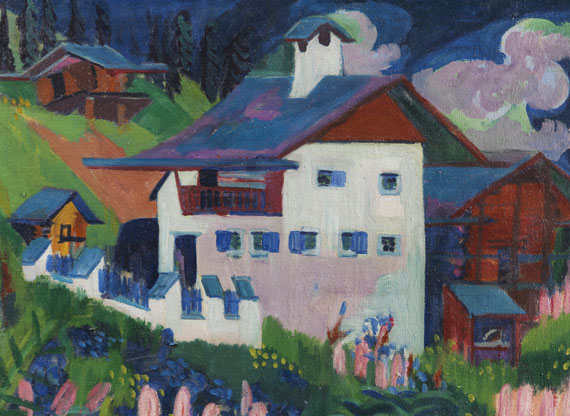 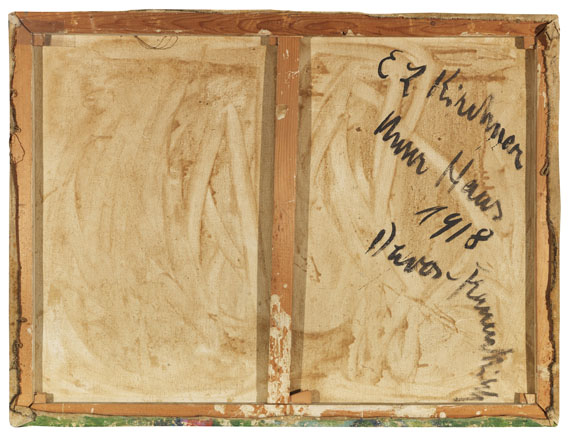 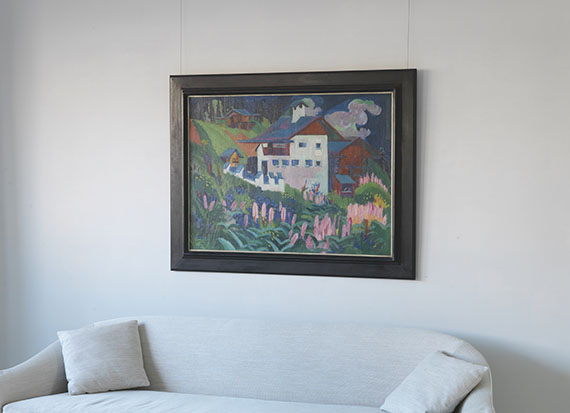