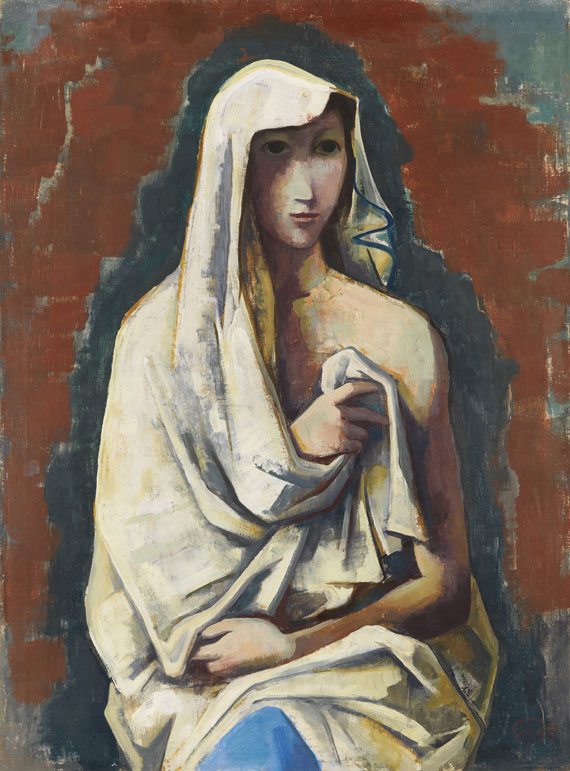 • With an exhibition history that goes back to its making.
• By choosing the traditional mythological subject of Sibylle, a prophet foretelling the future, Hofer also points to the looming terrors of WW II.
• Charming visualization of the artist's aspired atmosphere: A particularly expressive melancholy.
• On loan at the Museum of Modern Art in San Francisco for nearly 30 years (1957-1984).

Essay
An oil sketch made in preparation of our picture and inscribed with the dedication "Belongs to my dear wife Lisb. Hofer" (Wohlert 1117) was in possession of Elisabeth Hofer until her death. This detail, as well as the time of origin of our work with regards to Hofer's life at the time, hint at the great importance the work must have had for him. A few years before our work was created the artist was still at the peak of his career. His works were shown in a total of 27 museums and he also experienced growing international success. In 1933 all of this came to an abrupt end. Hofer was suspended, over 300 of his works were removed from public collections and defamed as "degenerate art", and an employment and exhibition ban was imposed on him. However, he showed resistance and stoically continued to paint, making, among others, numerous prophetic works in which he seemed to predict the atrocities and apocalyptic events of the looming Second World War. With the work offered here, the title of which refers to the mythological figure of "Sibylle", a prophetess who predicts the future, Hofer seems to draw the viewer's attention to future events that were foreshadowed in 1935. He wrote in a letter shortly before this work was made: "I feel an incredible creative power, I have never worked so much and so well. If it weren't for that, I would have had to end my life." (quote from: ex. cat. Karl Hofer, Hamburg 2012, p. 128). "The sensitive painter, by nature inclined to melancholy and bitterness, survived the anti-human and art-hostile Nazi rule only with the help of his painting, in which he found an outlet for the horrors, in which he could take sides and act as admonisher, but it also enabled him to escape reality, to seek the spaces of silence and harmony he longed for so much. " (Ibid., P. 128). [CH]
Ulteriori informazioni
+
Vendere
Desidera vendere un simile oggetto?
+
Registrare di
Karl Hofer
+
Domande sull´acquisto
+
Contattare esperti
209
Karl Hofer
Sibylle, 1935.
Olio su tela
Stima:
€ 100,000 / $ 116,000
Risultato:
€ 300,000 / $ 348.000
(25% commissione inclusa)
Ulteriori informazioni
+
Vendere
Desidera vendere un simile oggetto?
+
Registrare di
Karl Hofer
+
Domande sull´acquisto
+
Contattare esperti
Altre immagini 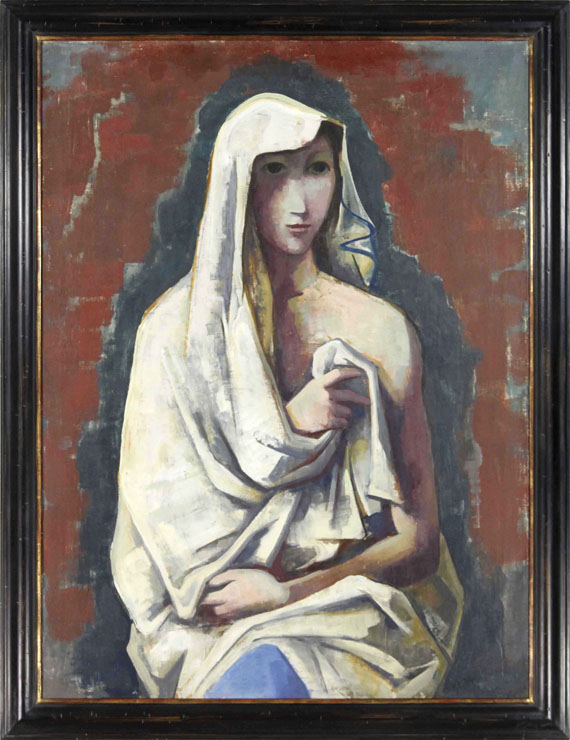