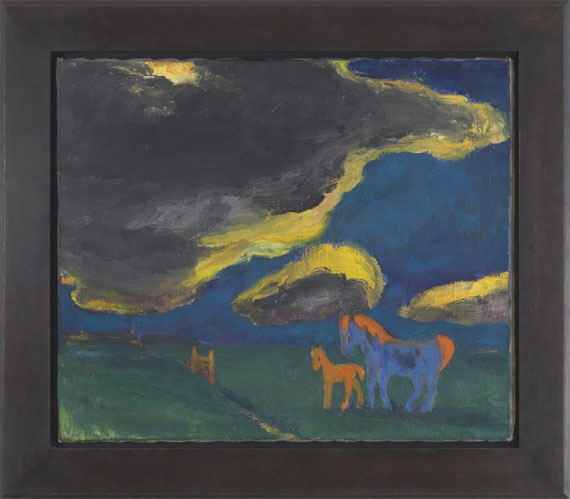 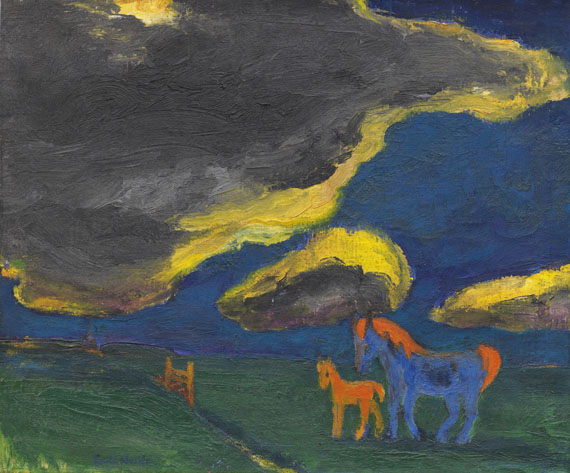 • A work with an eventful history - on display for just three days before the exhibition was shut down, it remained hidden in a barn throughout WW II.
• Consistent provenance - only two other owners besides Nolde.
• The painting "Junge Pferde" with a very similar motif is part of the collection of the Guggenheim Museum, New York.
• Mysteriously change of title from "Landschaft mit weißem Mutterpferd" to "Landschaft mit 'blauem' Mutterpferd".

LITERATURE: Sotheby’s, London, December 4, 1984, lot 37.
"The autumn winds blow from sea to sea above the house."
Emil Nolde to his friend Max Sauerland, collector and museum director, on October 25, 1925.
"Our landscape is humble, devoid of abundance and inebriation, we are well aware thereof, but the initimate observer is rewarded with a great love for its calm and heartfelt beauty, its sublimity and the wild and stormy life."
Emil Nolde, Reisen, Ächtung, Befreiung. 1919-1946, published by Foundation Seebüll Ada and Emil Nolde, 3rd edition, Cologne 1978, p. 9.

The old house near the west coast

Probably in 1913, before the trip to the South Seas, Ada and Emil Nolde bought "Utenwarf", an old, abandoned farmhouse in need of renovation and with some land on the ‘Wiedau‘ near the town of Tønder. The couple developed a deep bond with this piece of land, even if the beginning was a bit bumpy. The war and their financial situation after their return from the expedition from Asia made it impossible for them to renovate or even build something new. "We couldn't do anything with our 'Utenwarf'", wrote Nolde in his biography "Mein Leben". “The old house was uninhabitable, we weren't allowed to build a new one during the war. But we were irresistibly drawn to that place. We packed a few suitcases and moved over. The old boat belonging to the house was waiting for us. The New Guinea equipment and the camp beds were back in service. Our wanderlust and the thirst for action were also back again. We got a spade and a scythe. We fished, we cleared the ditch, and we worked in the garden which was just a wilderness. We mended the house and lived like gypsies. [..] During these weeks I didn’t do any work as artist in Utenwarf. But before that I had drawn and painted without interruption for almost two years, and many small notes and sketches of country life, the grazing animals, the young horses and the clouds above were made as preliminary work for later pictures. I had grown one with the clouds and the mood of my native region, something special and beautiful stayed in my memory forever. ”(Emil Nolde, Mein Leben, Cologne 1976/1993, p. 308).

Based on these sketches five landscapes with various depictions of horses on the pasture were created. In 1925, during his summer stay at Utenwarf, he took up the theme again and created “Landschaft mit Mutterpferd” (Landscape with Mare) was created. It was not until 1916 that Ada and Emil Nolde were able to convert and expand Utenwarf according to their wishes and create their now famous garden. This marked the beginning of a new artistic phase for Nolde. “It was wonderful when everything around us was only water for miles around, when the high sky was reflected, or when at night the moon with its cold shine formed a silver fairy-tale land. We also liked how the path leading from the old dike up to our place was marked with sticks, and when our horse had to pull the wagon with the legs deep in the water. And it was nice when the wind whipped the waves in long strips, or the colorful morning and evening clouds were mirrored on the surface of the water. A lot of romance and a lot of hardship, but beauty was able to replace everything else”, is how Nolde expressed his enthusiasm about the new landscape (ibid., p. 321). The "Landschaft mit Mutterpferd" could have been a farewell greeting to his beloved Utenwarf. During the same period the painting was created - in the summer of 1925 - the Nolde couple had to give up the homestead as the Danish government had plans to drain and cultivate the Wiedau lowlands; thus the original character of the landscape was lost. A fact that Nolde could not accept. Not far from Utenwarf the Noldes found an empty homestead on a terp on the German side. The house and studio in Seebüll was built based on Nolde's own designs in 1927, and marked the beginning of a new phase in his life.
"I was one with the clouds and moods of my home region"

And he shares his feeling for this deeply loved stretch of land with us when we look at the landscape with the blue mare and the contrasting red mane. It protects the recently born reddish-brown foal behind her from the sometimes sharp wind on the edge of a narrow canal with a sluice that cuts through the wide grassland for drainage. The clouds hang low, bulged with rain, their edges reflect the yolk-yellow light of the setting sun. The darkness of night slowly falls over the wide, deep green pastureland with the shadowy silhouette of a farm far in the background. Nolde was obviously deeply impressed by the beauty of the harsh landscape and the natural spectacle of clouds, water and constantly changing light conditions. At the same time, he fond the originality he was looking for, and which he would immerse himself in and become one with nature during his intensive painting processes. The dramatic sky over a vast landscape becomes the trademark of Nolde's art. Here he developed his most beautiful and impressive compositions. Nolde remained connected to nature throughout his life. He often focused on either the sole representation of the landscape or on detailed animal observations, among those created at the Berlin Zoo. In “Landschaft mit Mutterpferd” we find a unique combination of both. It tells of Nolde's deep connection to his Frisian homeland, to the land between the seas - to this flat, pristine stretch of land that many would call boring. Nolde lavishly stages this supposedly unexciting marshland. He sets the horizon low in order to give the sky and its natural phenomena the greatest possible space and effect. Depending on the season, the weather and the time of day, he captured the special features of the natural spectacle. The elements, nature and its creatures form an inseparable unit. Nolde captures this magic in his works. Like no other, Nolde is able to express his emphatic sense of nature on canvas.

The untold story behind the picture

As usual, the artist noted his name on the stretcher with an ink brush and added the title: in this case “Landschaft”. The artist also added “(mit weißem Mutterpferd)” with blue chalk in brackets. We find this title in the list of paintings created by the artist under the year "1930: '1925 Landschaft (mit weißen Mutterpferd)‘". After Nolde painted over the formerly white horse with blue, he corrected the title and crossed out “weiße” with a pencil. It is uncertain when Nolde changed the color of the horse. Prof. Manfred Reuther, long-time director of the Ada and Emil Nolde Foundation and an accomplished Nolde expert, dates it to the time between 1930 and 1937, perhaps in connection with the preparation of the Mannheim exhibition. In August 1937, the art dealer Rudolf Probst planned an exhibition of 92 paintings and watercolors at his Mannheim gallery “Das Kunsthaus” on occasion of the painter's seventieth birthday. Three days into the exhibition it was closed by the president of the Reichs Art Chamber Ziegler, who had come with three other men and stopped the sale of the pictures is forbidden. In the chronologically organized list of pictures from October 4, 1937, Rudolf Probst mentions the painting "Landschaft (mit rotem Mutterpferd)" (Urban 1017), as well as the painting "Landschaft (mit Mutterpferd)" (Urban 1018) from 1925. The exhibition at the Kunsthaus Probst runs parallel to the infamous Munich exhibition of “Degenerate Art”. According to Probst, the exhibition was well attended at first, but the parallel event of the Munich exhibition must have ultimately led to the forced closure. The 92 paintings on display there, including “Landschaft mit Mutterpferd” initially remained in Mannheim and were only evacuated from Mannheim after the outbreak of war in autumn 1939. They were taken to a safe, unknown location in the countryside. His accomplice in this undertaking was Alfred Heuer, a friend of both Nolde and Ernst Barlach. They made the plan to store the 14 picture boxes on a farm in Seestermühe near the town of Elmshorn in northern Germany. The farmer was a minor official of the local chapter of of the Nazi party that no one would suspect to hide the boxes of ostracized German avant-garde art. The monthly rent of 100 Reichsmarks probably helped him not to waste a thought on the content of th eboxed. And indeed, the hiding place, as Heuer and Nolde hoped, protected the paintings from the Ziegler commission and in May 1947 the paintings were returned to Seebüll without suffering any damage. In 1948 the work was still in possession of the artist. Nolde presented “Landschaft mit Mutterpferd” and other works to a journalist in Seebüll. In 1950 the work went into the possession of Christian Thomsen in Husum.
A blue horse

At first glance, one could cautiously assume that Emil Nolde references a blue horse by Franz Marc. This assumption cannot be dismissed Nolde was familiar with the idea of the "Blaue Reiter", and he had encountered the group‘s blue horse logo in an exhibitions at the Sturm Galerie of Herwarth Walden in Berlin in 1912. He also took notice of Marc's death in 1916 near Verdun and he knew of the “Tower of the Blue Horses”, which Marc painted in Sindelsdorf, Upper Bavaria, in 1913. In July 1919 Ludwig Justi, director of the Nationalgalerie in Berlin, acquired the work from Marc's widow Maria Marc and the famous expressionist work found a prominent spot in the Kronprinzenpalais, the new department for contemporary art at the Nationalgalerie. Since the establishment of the Kronprinzenpalais, Justi had also met Emil Nolde with whom he discussed purchase and loan options for his own room at the museum. Nolde presumably changed the color of the horse from white to blue between 1930 and 1937. The inspiration for this could have been two retrospective memorial exhibitions at the Berlin galleries of von der Heyde and Nierendorf in early May of 1936 on occasion of the 20th anniversary of Franz Marc's death. And last but not least, on this occasion, Alois Schardt published a first catalog raisonné of Franz Marc works in Berlin. Three years earlier, Schardt, succeeded Ludwig Justi as director of the Nationalgalerie and revised the compilation of Nolde‘s works at the Kronprinzenpalais together with the artist, in order to stage a politically less provocative hanging. Whether Nolde actually quotes Marc's blue horse or whether artistic and aesthetic demands guided him remains speculative. With the blue horse, however, Nolde created a marvelous picture of the Nordic landscape under a moving sky. [MvL / SM]
Ulteriori informazioni
+
Vendere
Desidera vendere un simile oggetto?
+
Registrare di
Emil Nolde
+
Domande sull´acquisto
+
Contattare esperti
332
Emil Nolde
Landschaft mit Mutterpferd, 1925.
Olio su tela
Stima:
€ 600,000 / $ 552,000
Risultato:
€ 750,000 / $ 690,000
(25% commissione inclusa)
Ulteriori informazioni
+
Vendere
Desidera vendere un simile oggetto?
+
Registrare di
Emil Nolde
+
Domande sull´acquisto
+
Contattare esperti
Altre cose che potrebbero interessarti
+
tute le offerte
Emil Nolde - Ogetti venduti
+
tute le offerte