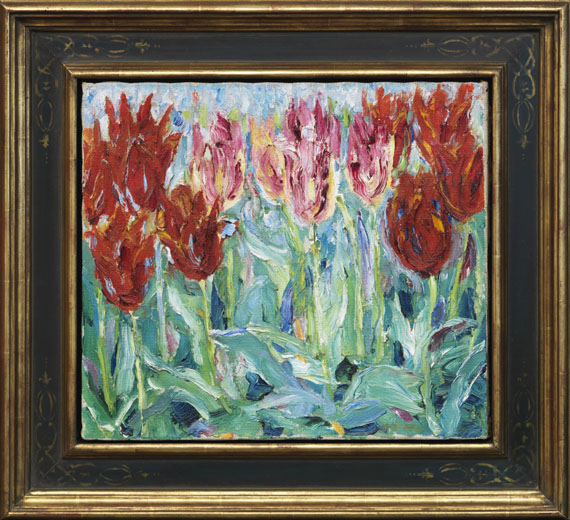 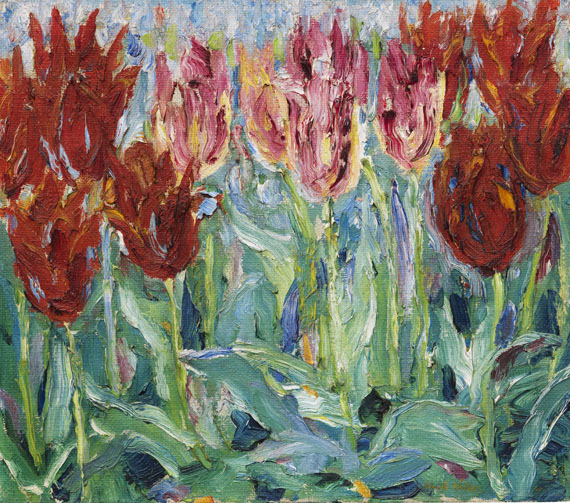 • After it was first sold through Aenne Abels in 1960 it has been family-owned for 60 years.
• Offered on the international auction market for the first time.
• The depictions of flowers are among the artist's most sought-after subjects.
• Early work with a dense, shimmering composition modeled out of the color.
• The oil painting "Blumengarten: Stiefmütterchen", made the same year and also in Alsen, realized 2.48 million euros at Sotheby’s in February 2020.

On February 4, 1906, Karl Schmidt-Rottluff wrote to Emil Nolde and invited him to become a member of the artist group "Brücke". The letter ends on the sentence: "Well, dear Mr. Nolde, think whatever you want, but we hereby want to pay tribute to you for your color storms." (Quote from: Emil Nolde, Jahre der Kämpfe, Cologne 1985, p 98). The Nolde exhibition at Galerie Arnold in Dresden, which the "Brücke" artists had visited a little earlier, did not comprise flower or garden pictures. The first works were created in the summer of 1906 and were included in the traveling exhibitions of the "Brücke" right away. The flower pictures earned Nolde first public recognition. In the long run, however, the artist saw this development as a risk, which is why stopped making these motifs for some time in 1909. Instead he opted for religious themes and figurative images. Since 1903 Nolde andh his wife Ada had lived in a fisherman's house on the Danish island of Alsen, around which they had laid out a flower garden. His later rural places of residence – Utenwarf as of 1916 and Seebüll from 1927 on – also had gardens which were thoroughly planned and executed and meticulously maintained. The artist showed little interest in bouquets of flowers arranged in vases, his pictures either show the garden from a certain distance, also in connection with a house and figures, or in close-up view that puts focus on leaves and blossoms. Nolde recalled: “It was on Alsen in the middle of summer. I was irresistibly drawn to the colors of the flowers, and almost suddenly began to paint. My first small garden pictures were created. The blooming colors of the flowers and the purity of those colors, I loved them. I loved the flowers in their destiny: shooting up, blooming, shining, glowing, exhilarating, heaving, withering, ending in the pit.”(Quote from: Emil Nolde, Jahre der Kämpfe, Cologne 1985, p. 100). The end, however, is just hinted at in his pictures. In the flower pictures from the years up to 1909, Nolde's exploration of color as a vehicle for expression and its emotional effects intensified. They led to a further increase of the luminosity of his paintings. And yet it is precisely in them that he recognized what is “inadequate”, what is different in the work of art compared to nature.
In a later conversation he said: “Observers of myI flower pictures will say that the colors are exaggerated. That is not right. I once put the pictures between the flowers and noticed that they were still far behind nature. We don't even know how overrefined our eyes are. ”(Quote from: Hans Fehr, Emil Nolde. Ein Buch der Freundschaft, Munich 1960, p. 43).
If not in a vase as a bouquet, tulips are a bulky motif for the painter, single, mostly straight stems with a few, simply shaped leaves and a single flower on top. Nolde only made them the sole motif of a painting twice, in 1908 and in 1915. In the later picture, the blackish green plants sprout from the dark brown spring soil, through which two narrow stripes of lighter green run right above the center. The tulips are arranged in a row that swings forward from the left center of the picture, then up in an arc and back to the upper center. The bright yellow and red flowers stand against the dark background like traffic lights. However, the painting from 1908 has a completely different character. The plants fill almost the entire surface, which is divided into two zones: a lower blue-green one with stems and leaves and an upper orange-red one with the blossoms. The colors in left and right are darker, the red of the flowers is deeply saturated. The green of the leaves and stems is interspersed with white dabs towards the middle and the blossoms are brightened up to orange, even to yellow. Tulips have the property of developing a peculiar charm and a special beauty when they fade, as the petals lose their strong monochrome color and produce completely new, unexpected color nuances.
Nolde seems to have captured the flowers at a point shortly before decay, just not yet “sloping, withering, discarded in the pit”. In the quotation he compares the fate of flowers with the fate of people. Accordingly, despite all the modesty of the motif, this picture also goes beyond a mere floral depiction and can be understood as an allegory of life in general, however it does not find an expression comparable with the symbolism that dominated Nolde's art in the early years; here it is entirely developed from the color and its dynamic application. Nolde's “color storms” have attained a clear form and deep meaning in this work.
Andreas Hüneke
Ulteriori informazioni
+
Vendere
Desidera vendere un simile oggetto?
+
Registrare di
Emil Nolde
+
Domande sull´acquisto
+
Contattare esperti
342
Emil Nolde
Tulpen, 1908.
Olio su tela
Stima:
€ 350,000 / $ 406,000
Risultato:
€ 437,500 / $ 507.499
(25% commissione inclusa)
Ulteriori informazioni
+
Vendere
Desidera vendere un simile oggetto?
+
Registrare di
Emil Nolde
+
Domande sull´acquisto
+
Contattare esperti
Offerte di Emil Nolde
+
tute le offerte
Altre cose che potrebbero interessarti
+
tute le offerte
Emil Nolde - Ogetti venduti
+
tute le offerte