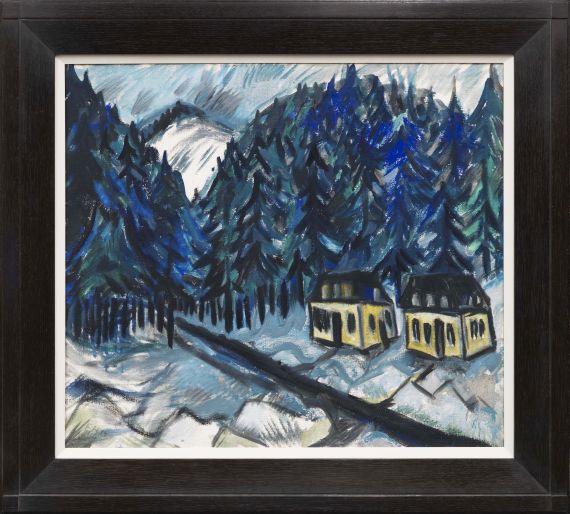 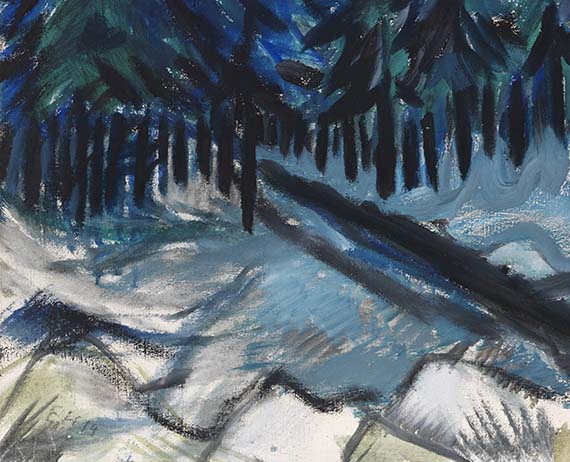 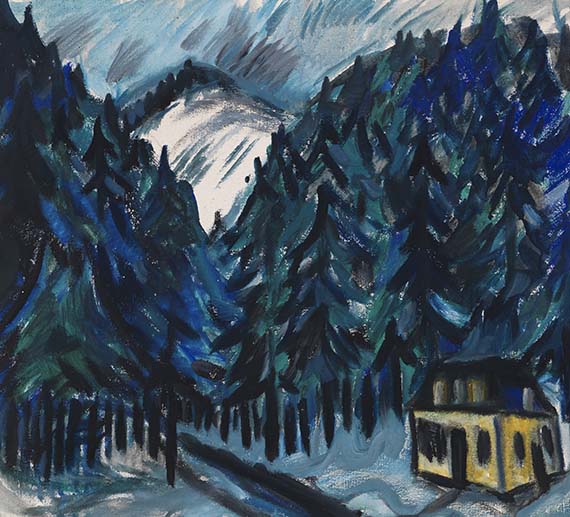 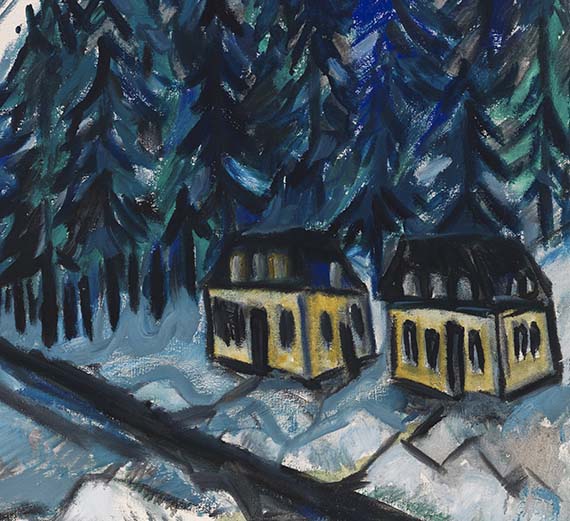 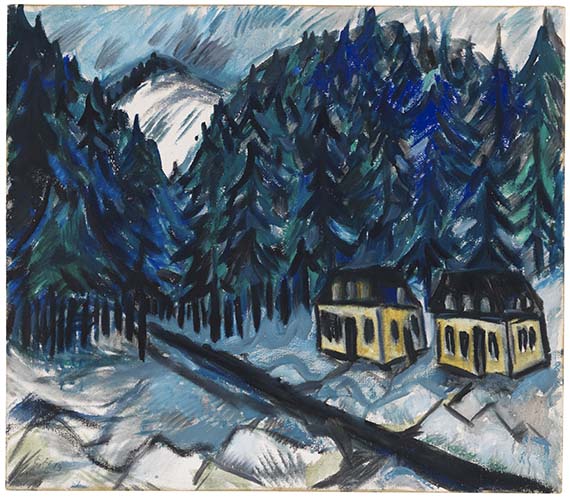 • Capital painting by the great expressionist from the early 1910s.
• From the collection of the Berlin chemist Otto Liebknecht, family-owned for more than 100 years.
• The energetic line and the bright colors are the essence of the "Brücke" style.
• Exceptional coloring reduced to shades of blue, wich is also characteristic of Heckel's famous works "Gläserner Tag" (1913) and "Kanal im Winter" (1913).
• One of only two landscape paintings by Heckel from his stay in the Erzgebirge immediately before his deployment as war paramedic.

PROVENANCE: Dr. Otto Liebknecht, Berlin/Potsdam (presumably acquire ddirectly from the artist around 1920).
Ever since family-owned.

"The strongest source of artistic power luies in what we don't know and don't intend."
Erich Heckel, 1914, zit. nach: Hüneke, München 2017, Bd. II, S. 460.
"Blue is the typical color of the sky. With great depth blue develops an element of calmness. Moving towards black, it gains a notion of non.human mourning. [..] Moving towards a lighter shade [..] it gains an indifferent character and positions itself to man like the vast and high light blue sky."
Wassily Kandinsky, Über das Geistige in der Kunst, Bern 2009, p. 97.

In 1905, Erich Heckel, together with Ernst Ludwig Kirchner and Karl Schmidt-Rottluff, was one of the founding members of the Dresden artist group "Brücke" (1905–1913), which, together with the southern German "Blauer Reiter" (1911–1914), is considered the nucleus of Expressionism. Shortly after founding the "Blauer Reiter", Franz Marc describes the unique character of Heckel's painting in a letter to Wassily Kandinsky from January 1912 as follows: "[.] he also works quite disproportionately, [.] difficult to understand, with lines that in the picture like heavy dolorous branches and weary burdens. To me the meaning seems to be somewhere far back in the picture, more a rumble than words or silence - both latter, the more banal ones, are missing. " (Quoted from: Hüneke, Erich Heckel, Munich 2017, vol. 1, p. 275). Marc wrote these words long before our winterly "Erzgebirge Landschaft", which shines in cool shades of blue and white, yet they are a very accurate description of the scenery we see here.

The ‘Erzgebirge Winterlandschaft‘ showcases itself quiet, deserted and covered in snow, with the two seemingly abandoned houses and the view across the dark forest over to the snow-covered mountain shining in bright white. Accordingly, this impressive painting, created a few months after the outbreak of the First World War, also ‘hides‘ its "meaning [.] somewhere far back in the picture". Like two frontlines, an army of blue-black fir trees with droopy branches is divided along the path leading into the depths like a trench. However, at its end it reveals a notion of optimism with the view of a brightly lit, snow-covered mountain ridge. In this context, this can be interpreted as an artistic symbol of the vision of a victorious end. Heckel stages a visionary landscape composition which has its particular strength in the powerful light-dark contrast of the reduced color palette, which is focused on different shades of blue. Similar to the painting "Kanal im Winter" (Nationalgalerie Berlin) from the year before, it is the expressive black line structure and the radiant white of the snow that inevitably directs the viewer's gaze into the promising depth.
The pre-war period – exchange with Franz Marc and the beginning war euphoria

Heckel, like his friend Franz Marc, was initially enthusiastic about the war shortly after its outbreak in the summer of 1914 and joined up. However, since he was classified as unfit, he did a paramedic training with the Red Cross in Berlin in autumn 1914. Before taking up his duties in January 1915, Heckel spent the turn of the year 1914/15 in the Ore Mountains. Our wonderful winter landscape is one of the extremely rare artistic from this creative period preceding his war deployment. According to Hüneke, only one other landscape painting from this period has survived, today it is in the Virginia Museum of Fine Arts in Richmond ("Erzgebirge im Schnee", Hüneke 1915-1). Like Marc, Heckel fell victim to an initial war euphoria, to which one of his letters to Gustav Schiefler from March 1918 testifies: "Before the war many saw their savings book as a demigod. I used to hope the war would one day convert some of those, but now this whole golden calf is going to get even worse." (quoted from Hüneke, vol. II, p. 461). In addition, Heckel lived in extremely poor conditions in his roof-top studio in Berlin, where he moved with Sidi in December 1911. His wife was often sick with fever as the rooms where hardly heated in winter. This unacceptable living situation was also documented by his fellow expressionist artist Franz Marc, who visited Heckel in January 1912 and probably also in September 1913.

In the antebellum year 1913, when the artist group "Brücke" was about to break up due to tensions between Heckel and Kirchner about the latter‘s claim to leadership, there was a close exvhange between Heckel and Marc, or between "Brücke" and "Blauer Reiter". Against this background it seems quite likely that Heckel, through Marc, was also familiar with Kandinsky’s color theories of the "Blauer Reiter". In Kandinsky's 1911/12 publication "About the Spiritual in Art" the reader learns about the effect of blue, which is also the main color in Heckel's "Erzgebirgslandschaft im Winter": "Blue is the typical heavenly color. From very deep, blue develops the element of calm. Sinking towards the black, it acquires the overtone of non-human grief. [..] Passing into the light, [..] it gains a more indifferent character and becomes remote and indifferent to people, like the high light blue sky. " (p. 97).
In 1914, Heckel responded negatively to a survey conducted by the "Zeitschrift Kunst und Künstler" on the topic of "The New Program" with the words: "The unknown and the unwanted are the source of artistic strength." (Quoted from: Hüneke, Munich 2017, vol. II, p. 460).

Unlike Franz Marc, who fell near Verdun in 1916, Heckel survived the horrors of the First World War and returned to Berlin in November 1918. In the same year, Ludwig Justi bought two paintings by Heckel for the New Department of the Nationalgalerie Berlin, the first and most important museum collection of Expressionism, among them was the "Frühlingslandschaft" (Spring Landscape) from 1918 (Nationalgalerie Berlin), which was created in Ostend during the last months of the war and is also considered a future landscape vision. The spring picture with the sun breaking out of the clouds is an expression of Heckel's longing for peace after the long war years and can therefore be read as a kind of counterpart to our visionary wintry pre-war landscape. Justi, whose commitment to German Expressionism remains legendary to this day, interpreted the "Frühlingslandschaft" he had acquired as a prominent example of an "own pictorial law", which only the most outstanding artists of the time were able to implement.

The Otto Liebknecht Collection – Enthusiasm for Expressionism and the deep blue

While the second oil painting "Erzgebirge im Schnee", created during Heckel's stay in the Ore Mountains in 1914/15, initially became part of Ludwig and Rosy Fischer's important expressionist collection, most of which is now in the Virginia Museum of Fine Arts, Richmond, Heckel sold our wonderful Erzgebirge landscape, created from a lively modulation of shades of blue, to the Berlin art collection of Otto Liebknecht (1876-1949) in the post-war years. Liebknecht was a successful chemist who worked for Degussa until 1925 and held over 50 patents on chemical processes, including for the production of an new type of bleaching agent, which is why he is still considered the inventor of the famous detergent Persil to this day. He also developed a process for the representation and purification of indigo, a blue-crystalline organic pigment with a high color intensity. In this context, it is not surprising that Otto Liebknecht was particularly enthusiastic about this atmospheric landscape vision by Heckel, which derives its enraptured atmosphere from its deep blue-opaque color palette. In addition to our "Erzgebirgslandschaft im Winter", this is also the distinctive feature of Heckel's famous paintings "Gläserner Tag" (1913, Pinakothek der Moderne, Munich) and "Kanal im Winter" (1913, Nationalgalerie Berlin). Despite his marriage to his Jewish wife and his socialist family background, Otto Liebknecht was spared major reprisals by the National Socialists due to his apparently indispensable achievements as a chemist. The family did not have to leave their house on Griebnitzsee until it fell under Soviet occupation after the Second World War. Liebknecht was able to keep the Heckel painting as part of his art collection despite the seizure of his villa by the Soviets, but he himself succumbed to cancer a short time later. Our wonderful "Erzgebirgslandschaft im Winter" remained in family ownership and is now offered on the international auction market for the first time. [JS]
Ulteriori informazioni
+
Vendere
Desidera vendere un simile oggetto?
+
Registrare di
Erich Heckel
+
Domande sull´acquisto
+
Contattare esperti
215
Erich Heckel
Erzgebirgslandschaft im Winter, 1914.
Olio su tela
Stima:
€ 300,000 / $ 348,000
Risultato:
€ 375,000 / $ 434.999
( commissione inclusa)
Ulteriori informazioni
+
Vendere
Desidera vendere un simile oggetto?
+
Registrare di
Erich Heckel
+
Domande sull´acquisto
+
Contattare esperti
Offerte di Erich Heckel
+
tute le offerte
Altre cose che potrebbero interessarti
+
tute le offerte
Erich Heckel - Ogetti venduti
+
tute le offerte